Letters at 3AM: What Are Human Beings For?

No I, only robot

Terry Gou is chairman of Foxconn, a Chinese manufacturer of iPhones. Foxconn employs more than a million people worldwide. Gou says, "As human beings are also animals, to manage one million animals gives me a headache." Gou plans to avoid headaches by replacing his employees with more than one million robots (The New York Times, Aug. 18, 2012).

That Times report also describes a Dutch electronics factory staffed almost entirely by robots: "[T]hey do it all without a coffee break – three shifts a day, 365 days a year." No coffee breaks, no sick days, no health care, and no unions. "'With these machines,'" said engineer Binne Visser, "'we can make any consumer device in the world.'"

And get ready for "robots that zoom at the speed of the world's fastest sprinters [and] can store, retrieve and pack goods for shipment far more efficiently than people" (from the same report). Amazon bought robotmaker Kiva Systems to produce, according to Kiva's website, "'hundreds of autonomous mobile robots [that enable] extremely fast cycle times with reduced labor requirements'" (The New York Times Bits Blog, March 25, 2012).

Hate your warehouse job? You won't hate it for long.

"'Every economy on the planet is headed in this direction,' said Prof. William Greene, of NYU's Stern School of Business" (New York Daily News online, Aug. 1, 2011).

The article goes on to quote Harvard economist Claudia Goldin: "'If you're doing something that can be written down in a programmatic, algorithmic manner, you're going to be substituted for quickly.'" Meanwhile, "South Korea ... is 'hiring' hundreds of robots as teacher aides and classroom playmates and is experimenting with robots that would teach English" (The New York Times, July 10, 2010).

"If Google's efforts to create driverless cars are successful, cab drivers [and] cross-country truckers ... could be out of a job" (The New York Times Bits Blog, March 25, 2012). Since that was written, Google's experiment has been wildly successful, tested on highways and in traffic. "As car computers get better at avoiding accidents, self-drive mode may become the norm, and manual driving uninsurable" (The Econo­mist, Oct. 20, 2012).

"Nearly six million factory jobs, almost a third of the entire [U.S.] manufacturing industry, have disappeared since 2000. And while many of these jobs were lost to competition with low-wage countries, even more vanished because of computer-driven machinery" (The New York Times, Nov. 25, 2012).

The Pentagon, of course, is having a robotic field day. "New robots ... are being designed to handle a [broad] range of tasks, from picking off snipers to serving as indefatigable night sentries. ... Fifty-six nations are now developing robotic weapons. ... What happens, ask skeptics, when humans are taken out of the decision-making on firing weapons? Despite the insistence of military officers that a human's finger will always remain on the trigger, the speed of combat is quickly becoming too fast for human decision-makers" (The New York Times, Nov. 28, 2010).

P.W. Singer's 2009 book Wired for War reports extensively on how the United States is developing robots designed for "kill decisions."

But you ain't seen nothin' yet.

Behold what The Economist calls "the relentless march of three-dimensional printing" (The Economist, Dec. 15, 2012).

Three-dimensional printers use powdered plastics, metals, woods, and ceramics to "make objects ranging from violins to pilotless aircraft"; soon, they may even "[print] organs such as kidneys for transplant" (The Economist, March 31, 2012).

Three-dimensional printers now manufacture "jewellery, ... the plastic grip[s] for an electric drill, the dashboard of a car, an intricate lampshade and ... artificial leg[s]. ... Millions of dental crowns and shells for hearing aids are already being made individually with 3D printers ... [as well as] a gearbox for a racing car. ... The box not only allows faster gear changes but is some 30% lighter. ... A Boeing F-18 fighter contains a number of printed parts. ... A 3D printer ... can even make mechanical objects with moving parts in one go. ... [GE] is exploring how it might use 3D printing in all its operations. ... Mr Idelchick, of GE Global Research, [says,] 'One day we will print an engine'" (The Economist, April 21, 2012).

Page 23 of a more recent Economist: "Three-dimensional printing is capable of churning out an increasingly complex array of objects, and may soon move on to human tissues and other organic material" (The Economist, Jan. 12, 2013).

Back on p.11 of the same issue: "Three-dimensional printing may cause a new industrial revolution."

How can it not? Right now "a basic, microwave-size 3-D printer costs less than $1,000, making almost anyone a potential manufacturer. ... A possible next step is for virtually every home to have its own printer. 'Once that happens, it will change everything,' said Carl Bass, CEO of Autodesk ... 'See something on Amazon you like? Instead of placing an order and waiting ... just hit print and get it in a minute'" (The Week, Jan. 18, 2013).

The curtain is rising on an economy in which you buy a house and a fridge-size 3-D printer, then print nearly every solid object that your house needs. Goodbye, Amazon, Wal-Mart, and Home Depot.

Yet, of all the articles in my thick "Robot/3-D" file, not one considers the consequences. Politicians and commentators seem clueless about what's coming at them.

Robots have replaced millions of workers and are on track to replace hundreds of millions. Three-dimensional printers may replace millions of robots, plus millions more workers, plus myriad functions of retail and transport. This isn't the future; the process has begun with, as The Economist puts it, a relentless march.

How does capitalism work in a society stripped of so many wage earners? For that matter, how does taxation work? If an increasing number of citizens cannot participate in commerce and can no longer financially support the state – well, then what? And what are people supposed to do? With their lives, I mean?

Who knows an economic or political "ism" that suits such a world?

There is no mechanism for stopping or controlling the new industrial revolution (and I'm not saying there should be). But the elimination of most human beings from the means of production will change, well, everything.

Call me whimsical, but robots and 3-D printers may make philosophers of us all, for, in the 21st century, the species may finally be forced to answer the oldest question there is: What are human beings for?

READ MORE
More Letters at 3am 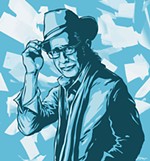 Letters at 3AM: A Long Goodbye
In the first of four parting columns, Michael Ventura announces his decision to end his biweekly column

The Road Is Long
Michael Ventura's many winding turns

Letters at 3am, robots, 3-D printing