After a Fashion: Hobnobbing

So, where should Your Style Avatar cram all these daisies he was supposed to be pushing up by now? 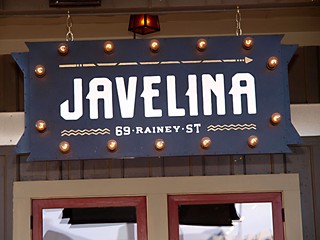 If you think Javelina is just another bar, then you should try it on Valentine's Day. More to come. (Photo by Seabrook Jones)

One of those lovely Paperless Post email invitations landed in my inbox recently, but I didn't know who it was from. I noted that the party was near Enfield, and that immediately made me think of my dear friend Stephen Rice who also lives near there. So I forwarded the invite to Stephen, who responded immediately, telling me the party was for Gary Schumann, president of the Austin LGBT Bar Association, who was turning 50. Embarrassingly (and as usual), I had no clue whether I'd ever met Gary before, but the location on its own told me that it would be a pretty swank party. Jacki Oh and I dressed to kill, of course, and arrived very fashionably late, but the party was still swinging. The house itself was faaabulous. Formerly the servant's quarters for the Pease mansion, Gary's house had been essentially stripped of its furniture, and the rooms reimagined as art galleries, conversation nooks, a speakeasy called Tiny's (which was indeed tiny and located down this labyrinthine stairway in the basement), and yes, even a complete disco with a great DJ from Dallas, lasers, fog machines, and lot of camaraderie. Even I was lured onto the dance floor. Me? Dancing? Well, I must admit that being as thin as I want and having fabulous eveningwear from my own collection, I have been no longer afraid to dance. But between you and me, I've actually let loose on the dance floor three times in recent memory, so something has come over me lately. Gary's friends Noel Landuyt and Keith Schumann threw the party and knocked it out of the ballpark. Good work, boys! And, uh, do keep me on your invite list!

Ready to break your New Year's resolution about "moderation?" Well, then do it for a great cause. On Friday, Jan. 25, 7pm, at 400 Congress, Equality Texas presents its annual three-sheets-to-the-wind Merry Merry Martini Mixer (www.merrymartinimixer.org), with this year's theme being Rock the Casbah. This very well-attended event is in its ninth year (have I been to all of them?) and raises money for Equality Texas to continue to bring a LGBT voice to the Texas legislature. In the past, Equality Texas was victorious in getting hate crimes and anti-bullying legislation in Texas. The agenda for 2013 includes a fight for employment non-discrimination and fair adoption practices. So while these subjects weigh heavily on our minds, a joyous get-together should definitely be on your list. Martinis, anyone?

I'm so confused about what to do with my clothing design work. I'd laid pretty low since my fashion show in November; frankly I was unprepared for the success of it. I was truly blown away by it all. Not that I don't like attention, but it's easier for me to accept the attention from writing and dressing in an over-the-top fashion. Attention for something for which I'd reached deep inside and manifested is a different matter entirely. It was thrilling, yes – but also unsettling, since I'd decided long ago that I didn't want to return to that part of my life. Since I am living now and no longer simply waiting to die, I have so many options of which direction to go. Do I want to go to the MAGIC trade show in Las Vegas and follow that with LA Fashion Week? Or do I want to cater to a swank shopping emporium that is so interested in me? I'll be dressing the models for the Wine & Food Foundation's big event, so that'll be fun. DIFFA (Design Industries Foundation Fighting AIDS) in Dallas puts on a huge event every year, and I've been asked to show. DIFFA rarely reaches out to designers beyond Dallas, New York, or LA. One of my dresses sold on Christmas Eve for $3,400. Unfortunately, the money does not go to me, but wow, was I shocked and thrilled or what? So, yes, it's all a bit unsettling for someone who was preparing to push up daisies just a year ago. But now, it seems like "everything's coming up roses and daffodils." I just don't know what to do with them.