Your Style Avatar examines the Crown Jewels. Don't be nasty ... 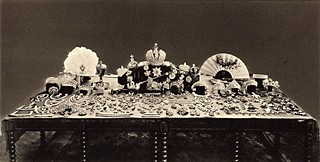 I've always been fascinated by the Romanov Dynasty that ruled Russia for 300 years. The tales of the fabulous wealth left me eager to dig up every related book, movie, or image. After seeing the movie Nicholas and Alexandra, I was totally besotted. The tales of the bullets being deflected – as the Russian royal family was slaughtered – by the massive jewels the women had sewn inside their clothes grabbed me by the throat and wouldn't let go. Where the jewels wound up is a tale in itself, but suffice to say that the Russian Crown Jewels are spectacularly magnificent, and in the hands of the Russian Diamond Fund. So, recently, I was surprised to receive a press release for the United States Geological Survey (www.usgs.gov), a science organization that provides impartial information on the health of our ecosystems and environment. How it fits into the story of the Romanovs is rather interesting. A gentleman named George F. Kunz (1856-1932) was a mineralogist, gemologist, and gentleman explorer who happened to be an employee of the USGS, but also of Tiffany & Co. In Kunz's private library (donated to the USGS Library upon his death) was the official documentation of the Russian Crown Jewels, "Russia's Treasure of Diamonds and Precious Stones," published in 1925. The tome is considered the jewels' most complete inventory. Kunz also had in his library an earlier documentation of the jewels, published in 1922, called "Russian Diamond Fund." Everything that was in the 1925 "official" documentation is in the 1922 publication ... but there are four photos in the 1922 book that are not in the 1925 publication. The four errant pieces include a grand sapphire and diamond tiara, a sapphire and diamond bracelet, a triple-strand emerald necklace, and a big, fat, juicy sapphire brooch in the shape of a bow. The jewels were worn by the Romanov royal family (1613-1917) until they were seized by the new government during the Russian Revolution and secured in secret until 1922. The "Russian Diamond Fund" album dates to the same year, and the photographs appear to have been part of the initial inventory. The brooch was known to have been sold in 1927, but it, along with the other gems, have since vanished. And now? The hunt is on.

Speaking of jewels, and therefore local gems, let me tell you about Ticketbud.com. When Jacki Oh and I were producing my Eleven Eleven/Hospice Austin fashion show last fall, we had to find a ticketing agent through which to sell tickets. Upon searching, the first one to pop up was Ticketbud. I liked their presentation, pricing, and the note that said, "We are particularly passionate about cancer research and relief, so much so that any event funding cancer research or relief uses Ticketbud for free." I didn't even look at another agency after that. I wrote asking if they would waive their fees since it was indeed a cancer-related benefit. The immediate reply was, "Yes, of course." Turned out I was dealing directly with the owner, Paul Cross, whose mother had recently died after struggling with cancer. Compassionate, caring, and willing to help any way possible, Paul smoothed the way for us. I liked that the website said, "We believe in simplicity and working for people fairly. We don't believe there's a legitimate reason to add additional fees to ticket sales, or to pass those fees on to the customer." For a flat fee, this self-service ticketing app gives you an event page with all your info on it and lets you sell as many tickets as you'd like. You can also track who bought tickets, at what price, and how many. As an attendee, you register, pay, and print your tickets online. I wrote to Mr. Cross thanking him for his incredible service and kindness, and for providing such a simple way for our guests to obtain tickets. Then and only then did I realize that, while they can sell tickets worldwide, Ticketbud is – get this – locally owned and operated. Faaaaabulous.