After a Fashion: Top These

Your Style Avatar gets on top of the Tops of 2012 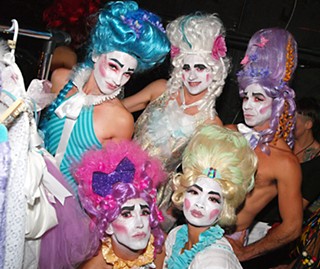 Backstage at one of the best events in Austin, Coco Coquette's 12 Ways to End the World (Photo by Seabrook Jones)

As 2012 slithers into 2013, it's time to reflect on the events, celebrities, and styles that represented the year. Referring to my proclivity for turning my annual Top 10 lists into Worst ofs, my esteemed editor Kate X once quipped, "You know that Your Style Avatar's tops are always bottoms, yes?" Well ... yes. I thoroughly subscribe to the theory that if you're not appalled, you're not paying attention. I'm appalled everywhere I look – not because I'm bitter, but because I'm deeply superficial. This year, though, having spent most of the year toiling on making dresses, I missed all kinds of things to be appalled at, so an informal poll of some of my friends helped compile these lists. Thank you to them, and thanks to you for reading. Let's have a faaabulous 2013.

1) LINDSAY LOHAN cast as Elizabeth Taylor. Are we sure Lohan herself didn't produce this execrable eye-bleeder under an assumed name?

2) CLINT EASTWOOD at the Republican National Convention. Deeply, deeply embarrassing for such an icon. And now, a reality TV series about his family? Ugh.

3) MILEY CYRUS and her home bleach-job faux-hawk. Isn't it we-e-eird that her current hairstyle is exactly the opposite of that which made her father famous? 2) KATE MIDDLETON What? The Princess has breasts? My own favorite fashion moment of 2012 was my own re-debut into the design arena. Models Micky Hoogendijk (l), Sydney Hancock (back), and Madison Paige (r) wear Made in Heaven by Stephen MacMillan Moser. (Photo by JohnPaul Wilson)

3) PRINCE HARRY Naked shenanigans in Las Vegas. Were those the crown jewels?

4) JOHN TRAVOLTA Endless sexual harassment charges: too many to count, too many to ignore.

2) LINDSAY LOHAN from the inside out.

3) HONEY BOO BOO Get them while they're young.

4) HONEY BOO BOO'S MOM Can anything be done?

5) COCO (of Ice T fame) Can one make over a thought process? Another major addition to the Austin Arts scene in 2012 was the opening of Zach's new Topfer Theatre, with plenty of philanthropists and local celebs in attendance. (Photo by Seabrook Jones)

1) PATTERNED LEGGINGS Changes the focus of the ensemble.

3) CHAMBRAY Yeah, you know what it is.

4) LONG TANKS For the multilayered look.

7) PASTEL HAIR One color only, please.

8) BATIK Coming back down to earth.

9) HAREM PANTS Shape is everything.

1) DAYTIME SEQUINS It's time to get away from that "walk of shame" look.

2) HAIR FEATHERS Right up there with roach-clip earrings.

4) NEON Just give it a rest for a while.

5) STEAMPUNK Done wrong, it is a nightmare.

7) BELTING EVERYTHING Strap yourself in, Christopher.

9) MOUSTACHES We're just not ready for them again on men. Women, however ...

10) EYEGLASS FRAMES WITHOUT LENSES If you don't need glasses: stupid.

(in order of loathsomeness)

6) PAUL "I would be a great veep, cuz I used to drive the Weinermobile" RYAN

7) SCOTT "Just give me a call" WALKER

8) MITCH "Is it too late for me to join your Tea Party?" MCCONNELL

9) RICK "Do they really use my name to describe that?" SANTORUM

HONORABLE MENTION: WAYNE "Make my day with the NRA!" LAPIERRE

Farewell to a few who made a difference 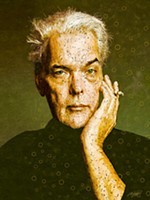 After a Fashion: Granted
Stephen put his heart on the line and has peace to show for it

After a Fashion: Wandering Lust
Finally! Details about Your Style Avatar's return to fashion