Letters at 3AM: Winter Reveries 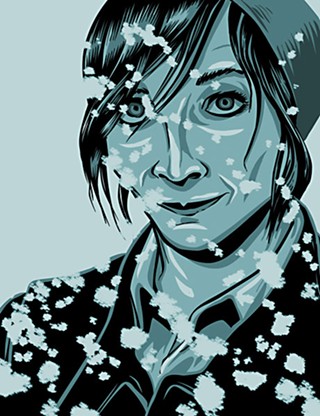 Donna wasn't really pretty. She was kind of scrawny. No stunning features. I remember a pale face, dark hair, gray eyes – but I may be wrong about the eyes. What she wore didn't flatter her. You never noticed her clothes. The thing about Donna – and I don't exaggerate, I promise – is that every guy who met her, every guy worth a damn, fell in love with her. There was something only Donna possessed, or something that possessed only Donna – something you fell in love with. Her sad glow, her brave laugh, and something other. Anyone who knew her knows what I'm talking about. I've not seen that something in anyone else – not even in a movie.

I never thought I could be her boyfriend. Donna seemed meant for possibilities I knew nothing about. The indefinable – the infuriatingly indefinable! – shimmered around that girl.

I thought she inhabited that Carl Sandburg poem, "Gone": "Everybody loved Chick Lorimer in our town./Far off/Everybody loved her. ... Nobody knows where she's gone."

I was 16; Donna, a little older. But that indefinable thing made her lots older. And I think she knew this, for she behaved as though she knew.

I can't remember why Donna and I walked together from the information booth in Grand Central Station out the 42nd Street entrance. It wasn't a date. We never dated, never even "petted." But suddenly, there on 42nd Street, we were kissing. I'd kissed girls before, but that kiss – the world disappeared and there was only that kiss. I'm not kidding. The world disappeared.

There was another kiss – on the roof of a tenement on West 85th Street. Donna was living with an older guy. I didn't care. I knocked on the door. He wasn't happy to see me and he was tough; he could take me, and I didn't care about that either. Donna grabbed my hand and led me up to the roof. It was very cold. I wore a coat and she did not. We kissed again. She smiled that smile. She whispered: "The last kiss of childhood."

I walked those freezing, dangerous streets – in those days, very dangerous – thinking, at first, that she meant it was the last kiss of my childhood. No. She'd kissed the last kiss of her childhood. To my boyish heart, it felt like a kiss that could only be kissed on a rooftop in the dead of winter.

I walked and walked. I was glad to be cold: freezing feet, freezing ears. I thought of how Anita O'Day sang, "Do nothin' till you hear from me – and you never will."

That is when I understood something about the soul of winter. Ever since, I've felt that winter looks at you with Donna's eyes, though I can't be certain of their color.

All through high school, I visited New York only on vacations. I lived with a minister's family in Waterville, Maine, where snow stuck to the ground in November and did not melt until late March or early April.

Eleventh-grade English with Mr. Carlo. He taught that you make a sentence the way you build with wood. You chop, carve, shape, sand, polish, and make your tables and chairs. Sentences take their places like furniture in the room that is the paragraph and the house that is the essay.

That's not precisely what they taught, but that is what their teaching taught me. I wasn't destined for much college. English with Mr. Carlo and Mr. Judson, and history with Mrs. Willard, were my lasting education.

The family I lived with was asleep by 11. I'd take my Olympia portable manual typewriter to the kitchen, make instant coffee, put on Louis Armstrong or Charlie Parker or Charles Mingus, and begin the essay that had been assigned days ago and was due in the morning.

Winter, my senior year. I was 17 and tireless and getting the hang of what Carlo and Judson taught. That was excitement. That was adventure. Their lessons met my mother's, who said, when I was 12, "Remember, words are music." I had a long way to go, but I knew that this work was my beginning and that this beginning was real. That's not hindsight. I just knew.

Otherwise, I was a reckless student: D's in languages, D's in mathematics, a generous D in chemistry (I deserved an F), but I didn't care. Didn't care about the SATs. I cared about writing all night for Carlo, Judson, and Willard. (I also cared about being the best dancer in the school.)

I paced myself to finish my essay by dawn, and I almost always did. One night, especially pleased with my work, I took off my shoes, opened the front door, and stepped off the porch onto the thick, packed snow. No wind, no breeze. Tiny snowflakes drifted straight down. The air was indigo. The snow glittered with streetlamp light. I stood in my stocking feet until they hurt and hurt. I had an inkling then that to be an artist is never to be alone. There's you and the work, always you and the work.

Back inside, my feet thawed painfully.

The last line in my last essay for Mr. Judson read: "Thank God we go on, born to be doomed though we are."

(See, I haven't changed all that much.)

In Los Angeles, December smells of roses. Exhaust fumes and roses. The air gets chilly but never feels cold if you've wintered in Maine. The sun is a bright white inside the gray of the sky. It's the month of Christmas, but in Los Angeles the Christmas trees seem terribly far from home.

This is true everywhere, but the signature of Los Angeles is that the city itself seems to brag about its evanescent nature. Eve Babitz nailed it: "In Los Angeles it's hard to tell if you're dealing with the real true illusion or the false one."

New Year's morning, just at daybreak, January 1, 2000. I went walking. I stopped in the center of a large parking lot to watch a flight of gulls. What were they doing eight or so miles inland? They were circling me! They really were. Using me as a marker for their landing. They really did. I'm muttering things like, "This is fucking mythological, and, by the way, kind of frightening," as gull after gull swooped to land all around me. I was encircled by gulls. Gulls are big birds up close. Really big. And most were watching me.

I stood still in their midst. The gulls didn't move much. I took a step, and then another, carefully. A few made way for me. More steps, and more made way. And then they were behind me. I looked back. They weren't looking at me anymore.

I walked quickly home, to return to the part of my life that I call "my life," where things like that don't happen, not even on a fragile-feeling winter daybreak in Los Angeles, at an hour that hinged two centuries and was so swiftly gone.