H&M and Zink have a lot in 'store,' and Seabrook's benefit was a smash 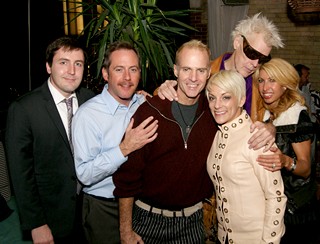 Having heard Jonathan Adler's name a bit too often and linking it to kitschy Sixties and Seventies decor that wasn't cool when it was new the first time around, I did not expect much from his booksigning at his eponymous store on West Fifth but was practically dragged there by Jacki Oh. It turned out to be a hive of stylishness and stylish people. Mr. Adler puts a high-camp spin on the decor, definitely appealing to the urban gay sensibility. From needlepoint pillows featuring Liza Minnelli's face, to a large, suggestively peeled brass banana, to my favorites: the canisters marked "dolls" (as in Valley of the Dolls), and the matching ones in various sizes marked Wellbutrin, Xanax, Ganja, etc. Clever, fun, and bright (though not inexpensive) for some terrific gifting choices.

The first benefit for my dear friend Seabrook Jones was a lovely, heartfelt tribute to a much-beloved character in the style and nonprofit scenes. So many folks came together to see their old friend. I had an especially emotional moment with Louisa Spaventa (Ruby Lamb), because seeing her brought me right back to the time and place I met Seabrook. Another benefit is planned for Wednesday, Dec. 12, 8pm-2am, at Kingdom, featuring DJs and producers Gabriel & Dresden, with support from Matt Lange and local DJs Jason Jenkins, Christian Barbuto, and Andrew Parsons. Tickets are $25 in advance (www.kingdomaustin.com) and $30 at the door.

The Winter Bazaar by the Fashion and Retail Management Program at the Art Institute of Austin will be held Wednesday, Dec. 12 (12/12/12 – when will that ever happen again?), 7pm, at Lucky Lounge. The 24 students in the Fashion and Event Production class are responsible for every part of the show. Unlike other fashion programs, the classes focus on the merchandising and management side of fashion. Though a majority of the looks have been sourced from various designers and boutiques, the Winter Bazaar will indeed have a small segment of student designs within the show. The final result should be very exciting. For details, email Kris Deaton at kdeaton07@yahoo.com.

Vaunted retailer H&M has opened at the Domain. I do wish the store were more centrally located – like Fifth & Lamar or Second Street ... but H&M did not ask for my opinion on the matter. Even so, I was eager to check it out (no, I did not camp outside the night before they opened). Go scoop up some reasonably priced high-style for the holiday parties you've got coming out your ears... Also on the shopping front is the new Zink brick-and-mortar store at 1601 W. 38th. With a spare and modern layout, the colorful canvas and leather bags become the decor, and designer Ben Freedland takes such pride in his craftsmanship that the bags become investment pieces. Stop by and see Ben, or go to www.zinkstore.com.