After a Fashion: A Deeper Code

Two days after my own show, I was still so drained and weak that the idea of going anywhere except the hospital was out of the question. But then again, it was Gail Chovan's show, and, in almost 14 years, I've never missed a single one. Gail is the real fashion star in Austin, leaving other designers in the dust with her designs and concepts. Never one to follow any trend, she works within a bell jar, creating her monochromatic fantasy world and making clothes for women who have a mind of their own. Two days before her own show, my longtime friend showed a preview of this new collection at my Eleven Eleven show at the Driskill for Hospice Austin. I'd desperately wanted her counterpoint to balance my show and frankly, did not care what she showed, as long as she did show. She did, and it was perfect. For her to take the time to do my show, when her own was so precariously close, was a supreme compliment to me and clear evidence of devotion. So, miss her show because I was weak and ill? Forget it. Not gonna happen. I compiled an ensemble that looked like it may have come out of Grace Jones' closet, all in black leather and gray. Escorted by my devoted co-producer, art director, best friend, and muse, Jacki Oh (in all black, of course), we walked into Justine's for the show, which was called "de quoi avez-vous peur? [what are you afraid of?]." Directed to an extremely long, medieval-type table adorned in ivy and black candles, I sat with Jacki, Micky Hoogendijk (aka ANTG – America's Next Top Goddess), and Ross Bennett. We were given soup and bread (no spoons) and drank from our bowls as the models scaled a small set of steps and paced themselves, bare feet streaked with black paint, down the middle of the table. Ghostlike and wearing black leather with hand-knotted fringe, sometimes combined with various sheer blacks and gray lace, the collection did indeed make the viewer ponder the question, "What are you afraid of?," among many others. That is Gail's very stock-in-trade: Keep 'em guessing. Make them think outside of the box, and, as a matter of fact, crush the box to pieces and then burn it. What rises from those ashes are Gail's collections, free of constraint, flouting convention, and taking us to places we've never dreamed of. Quotes Gail on her website, www.blackmailboutique.com, "It's about atemporality. About opting out of the industrialization of novelty. It's about deeper code" (William Gibson, Zero History). As a designer, Gail has a deeper code than any other designer I've met. It nourishes her, it propels her, it makes her crazy sometimes, but the finished effect is always breathtaking in its concept. Congratulations on Collection 15, Gail. To paraphrase what I said at the Austin Fashion Awards when you received your award: In my personal pantheon of fashion icons, you are Goddess No. 1. 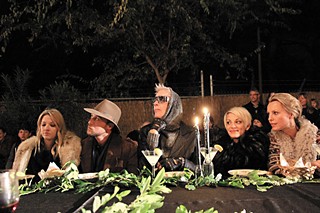