After a Fashion: Goodnight, Sweet Hoodie 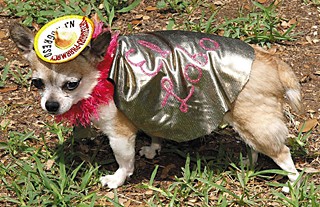 Hoodie, in his healthier days, desperately tried to be the butchest four-pounder in the neighborhood. (Photo by Seabrook Jones)

It was an awful day. It was 1999, and I'd moved from Seattle to Austin and was staying in my sister Margaret's two-bedroom condo on the lake. The condo was jammed to the ceiling with my design and industrial sewing equipment. Having dealt with it for almost six months, Margaret borrowed a friend's truck, and we loaded up the heavy equipment and boxes and headed out into a light mist to go to the storage place that was on the other end of the earth. We were tired and grouchy, and when we went over a speed bump, a tragedy occurred. One of the deadweight industrial machines had fallen over in the bed of the truck and shattered to pieces. I knew what the sound was and was too heartsick to even stop and examine the damage. Margaret felt terrible and knew I was devastated, but we continued our morose drive to the outer ring of Saturn. Up on Airport Boulevard by Highland Mall, we drove by just as a truck pulled aside and set out a sign that read: "Chihuahuas."

Margaret and I looked at each other with wide eyes, and without thinking, she did a U-turn and we screeched into the parking lot where the puppies were. The mother dog was there, worn out, with teats hanging to the ground, and it was probably a puppy-mill operation ... but Margaret and I were enchanted. There were a number of puppies, some looking more like Chihuahuas than others. Margaret picked up a little tan one, a girl who immediately licked Margaret's face. She was sold. I'd picked up the shyest one, a darker-colored tan boy with white spots and a black mask across his face. His tail had been mutilated somehow and his palpable fear made me hold him tight. I was sold. We made a deal with the owner for the two of them and I ran on foot down to the gas station to get cash. Back in the car, we were besotted with them. As brother and sister, Margaret and I had chosen a brother and a sister. They were so small that if we cupped our hands together, they would both fit in – so tiny that many people who saw them had no idea they were dogs. What they were imagining we were leading around on a leash was beyond my comprehension.

We named them Addison DeWitt and Miss Caswell after characters from All About Eve and we spent every moment we could with them. When I was at work, Margaret would often carry them around in a festive basket while children and blubbery women oohed and aahed over them. Sometimes, she would simply slip them into her coat pocket and they were happy as clams – tiny, hairy clams. They brought us endless amusement as we watched Miss Caswell become the leader of the pack, hogging all the food while Addison shivered in the corner. Naturally we had to make sure that Addison was getting enough food of his own, so we hand-fed him. What a mistake! In no time at all, Addison shed his meek and mild persona for one that was far more demanding, accompanied by barking that sounded more like a chicken crowing. Soon, he learned to take over the food, growling to forbid Miss Caswell from going anywhere near it. The first time Addison barked, Margaret and I fell apart laughing. He threw his head back like a turkey and made a sound like gargling. Soon he was crowing with the best of them. While Miss Caswell was so loving and sweet, it was Addison who brought out the most riotous laughter and loving hugs. We sang to him, wrote musicals about him, cast him in movies, wrote stories in the newspaper about him – all met with the same wide-eyed, uncomprehending stare that he had all his life. Eventually, he became known as Hoodie (pronounced WHO-dee), and the name stuck with him all his life.

For the next 13 years, he was my baby. I loved the retarded little thing as much as anyone can love a pet. As our pet household expanded, he adapted, too, becoming just a little more possessive of us and a bit more cantankerous. He became known as a grouchy old man, but he was my grouchy old man. I remember holding him up to myself in a big hug and saying, "You are Daddy's little man. Daddy's teeny-weeny little man." He remained so until a painful, progressive illness dictated that he be put to sleep. And so he was on his 13th birthday. I just couldn't be there when it happened. I knew I'd break down too hard. I asked Margaret and my mother to handle it. At 4:45pm that afternoon, I received a text from Margaret's phone saying, "Dear Daddy, I am an angel in heaven now. I love you for eternity. Hoodie."