Letters at 3AM: A Big Picture and a Long Game

A U.S. military powered by biofuels could be a game-changer that ends the oil wars 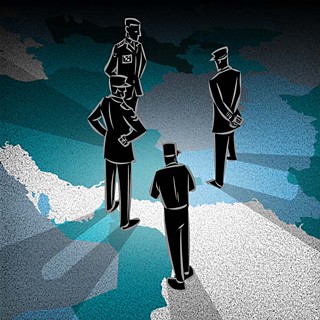 It's like Alice watching the Queen of Hearts play cards and croquet: "Three times so far this year, the Joint Chiefs of Staff and the regional war-fighting commanders have assembled at [Marine Corps Base Quantico, Va.], where a giant map of the world, larger than a basketball court, was laid out on the ground. ... The generals and admirals walked the world and worked their way through a series of potential national security crises. ... 'Strategic seminar' is the name Gen. Martin E. Dempsey, chairman of the Joint Chiefs of Staff, has chosen for these daylong sessions" (The New York Times online, Sept. 12).

Let's walk this immense map. We'll stroll roughly 5,500 miles from the Strait of Gibraltar eastward to the Afghan-Pakistani border. Then let's amble another 7,000 miles from Kazakhstan in Asia to Angola in Africa. In the area we've walked, alliances overlap and contradict one another – and are further complicated by trade routes, oil fields, rebels, pirates, and terrorists – and the United States has positioned itself in such a way that its chain can be yanked from almost any direction.

Focus on oil. According to the U.S. Energy Information Administration (www.eia.gov), in 2011, 69% of U.S. oil originated in five countries, listed by volume: Canada, Saudi Arabia, Mexico, Venezuela, and Nigeria. Of the next 10 largest sources, six are in the area we've walked: three in the Persian Gulf – Iraq, Kuwait, and Oman; three in Africa – Angola, Algeria, and Chad.

Draw lines of possible crises this way and that, and the generals, admirals, and war commanders walking the big map must be bumping into one another with alarming frequency any way they turn. All for imported oil.

Oil dependence has put the United States in a strategically vulnerable and ultimately untenable position. There's no way we can cover all that turf indefinitely. We've neither the money nor the manpower.

One issue is clear: The cessation of our participation in Iraq and Afghanistan won't affect the overall situation.

"Large numbers of MRAPs [armored troop carriers] ... in Iraq and Afghanistan [will be] stored in Italy, where they could be transported for contingencies across Africa" (The New York Times online, July 27). "Contingencies" is a neutral word for war.

In 2008, President George W. Bush authorized "the newest regional headquarters, Africa Command" (The New York Times, Oct. 5, 2008, p.8). "Africom" is based in Stuttgart, Germany, "owing to local [African] sensitivities." Its commander, Gen. William E. Ward, "rejected criticisms that Africa Command would result in a militarization of foreign policy, and he said it was specifically structured for cooperative efforts," though he didn't define what that meant.

Whatever it meant, President Obama has appointed a new commander. Gen. David M. Rodriguez is an officer of "extensive combat experience. ... [He] served two tours in Iraq and two tours in Afghanistan ... and later [was] deputy commander of allied forces there with responsibility for day-to-day management of the war. ... [Rodriguez] was one of the architects" of Obama's Afghan surge (The New York Times online, Sept. 19).

Sounds like the Pentagon and the White House anticipate action in Africa.

The July 27 report cited above added that "MRAPs would be sent to warehouses in the western Pacific" and "significant numbers are stored in Southwest Asia."

Recently, Secretary of State Hillary Rodham Clinton and Secretary of Defense Leon E. Panetta crisscrossed the western Pacific from China to New Zealand assuring everybody that we're not trying to "contain" China; we're merely, in Panetta's words, continuing "to be what we have been now for seven decades: the pivotal military power in the Asia-Pacific region" (The New York Times online, Sept. 13).

But something is true today that has not been true for most of those seven decades. According to the Central Intelligence Agency (www.cia.gov), China is the No. 1 trading partner of Australia, Japan, South Korea, Malaysia, the Philippines, the Solomon Islands, Taiwan, and Thailand. And China is a major commercial player with everybody else in the region.

We're defending these Pacific countries against their major trading partner?

"'What worries us is having to choose [between the U.S. and China] – we don't want to be in that position,' said the foreign minister of Indonesia" (The New York Times online, June 1). You bet they don't.

China, Japan, and others are jockeying for some seemingly worthless (even uninhabited) islands in the South and East China seas.

"Quarrels over these hunks of volcanic rock wouldn't matter much except that China, Vietnam, and the Philippines are running into one another in the race for oil" (The New York Times, Nov. 13, 2011, p.SR4). It's about offshore drilling, that report says. "The South China Sea alone is estimated to have 61 billion barrels of petroleum – oil and gas – plus 54 billion yet to be discovered." Oil again.

In the long game, who wins influence over the area? The United States or China? Put it another way: Who wins? The depleted, financially struggling, politically deadlocked nation many thousands of miles away or the money- and manpower-rich rising nation playing in its own pool? (After all, the disputed areas are called the South and East China Seas.)

Again, the U.S. is setting itself up in a strategically untenable position.

But the unexpected always happens, and that NPR report reveals something most unexpected: Of all U.S. federal institutions, the Navy and Air Force lead in seeking a nonviolent, eco-friendly path out of America's strategic morass. They "have been busy testing their aircraft ... on jet biofuel. ... [T]he Navy has launched a project to invest up to half a billion dollars in biofuel refineries. Mabus says he is committed to getting 50 percent of the Navy's fuel for aircraft and surface ships from renewable sources by 2020 because dependence on foreign oil makes the U.S. military vulnerable."

Predictably, "the biofuel program has struck a nerve among Republicans," who are trying to limit military biofuel use by law (The New York Times online, Aug. 27). Their Big Oil donors know that if a military market makes biofuels cheap, then America's airlines, railways, and truckers will want it too, and other oil-dependent nations will follow our lead.

Mostly for the sake of oil, the Obama administration's strategies extend U.S. military reach beyond practical limits – limits that Mitt Romney, if elected, plans to strain still further. But the military has come up with an elegant solution: Strategically and environmentally, a U.S. military powered by biofuels could be a 21st century game-changer that ends the oil wars and drains Big Oil's political dominance.

That is a real possibility. It is also possible that, walking a map bigger than a basketball court, our commanders will bump into one another indefinitely, attempting to defend an indefensible strategy.

Land of Marvels: A Novel
"He who owns the oil will own the world ...": Barry Unsworth's latest is a finely drawn novel set in 1914 Mesopotamia

GOP Oil Spiel Not So Slick
On the Campaign Trail