After a Fashion: Out 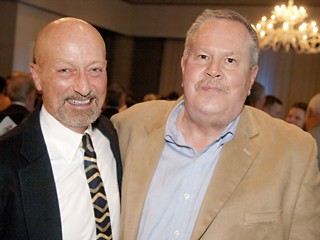 I just couldn't be at the studio anymore. It seemed like I'd been there for weeks, but it had only been three days. I just needed to be home in my own bed and nothing else. But, of course, leave it to my sly and wily friend Stephen Rice to lure me away from work. "Hey, girlfriend, you going to the ASA and Livestrong events tonight?" "Uh," I stuttered. "No, I hadn't planned on going anywhere but the studio." Not the answer he wanted to hear. "Come on," he said, "I'll even drive down and pick you up." I've missed Stephen a great deal lately and the idea of spending time with him and his husband Mark Erwin sounded really good ... better than sewing, anyway! Since I was on my way to work and simply did not have the clothes with me to make a public appearance, I made Stephen drive me over to my studio out by the Formula One racetrack where I had an entirely new, freshly designed men's collection from which to choose my outfit for the evening. Then we retired to his house across town where I hurriedly pulled myself together to face a crowd. It was AIDS Services of Austin's 25th Anniversary Party, an incredibly emotional and lovely ceremony outlining 25 years of battling the plague. And there was indeed plenty of talk of when it was actually known as "the gay plague." HIV was at one time known as GRID – gay-related immune deficiency disease. I remember it on the cover of Time magazine in the very early 1980s. Anyway, the history of ASA is a history shared across the world, and this event was so perfectly sculpted to reflect its noble history. At my table were Michael Scheschuk, Corey Wertenberger, Tanya Acevedo, Mary Morrison, Eric Behrens, Douglas Plummer, Craig Davis, David Burton, Stephen Rice, and Mark Erwin. We were there courtesy of Bill Dickson, who is one of the most unsung heroes of philanthropy, particularly to gay-related charities. He was noted for having donated the largest amount of money over the years – a cool $1 million. Lots of kudos to him. After lots of sparkling conversations and seeing old friends like Libby Sykora (Bettie Naylor's surviving partner) and Tana Christie, a goddess of beauty and philanthropy, we walked out feeling pensive yet uplifted ... which was the total opposite of the party we went to after ASA's. Our friend Matt McGinnis had his third annual Livestrong fundraiser at his home (Casa McGinnis), but we'll have to tell you all about that next week.

All Kinds of Style

On Saturday, Oct. 20, philanthropist Cord Shiflet and his wife Annie are hosting the Glitz benefit for OutYouth at their gorgeous home. Tickets available at www.outyouth.org/events/glitz... The Royal Court of Ashes Masquerade Ball & Art Show is Friday, Oct. 26, 8pm-2am, at the Blackheart. The event will showcase the fabulous art of Charlie Terrell (www.charlieterrell.com) and Linda Hughes and will feature a full runway fashion show, live music, and DJ sets. The paintings come to life on the runway with glorious designs by Dina Chavez and Lars Ranson, hair by Kelli Wilson Ponce, makeup by Bobbi Douglas, and jewelry by two of my favorites, Gay Isber and Kristin Bunyard. Masquerade attire is strongly encouraged! For information visit www.facebook.com/TheRoyalCourtOfAshes or email john@jleogroup.com, and buy tickets at www.brownpapertickets.com/event/271955. As the emcee, you know I'll be there in something wild... Also on Friday, Oct. 26, 10pm, at Haven, Bad JohnPaul presents his Halloween Murder Bash. Best costume wins a print from Bad JohnPaul. Tickets are $10 at the door.