Your Style Avatar contemplates ending it all … no not like that! With Coco Coquette! 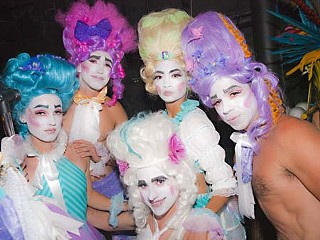 Performers from "The Dream," the final act of Coco Coquette's latest extravaganza (Photo by Seabrook Jones)

If I could choose where I would be when the world ends, I'd choose Coco Coquette's 12 Ways to End the World show at ND at 501 Studios last Tuesday night. Coco Coquette (aka Allyson Garro) is the mistress of all things glamorous. Her eponymous shop/wig salon is a testament to that, offering everything from the most dazzling false eyelashes to the chicest sunglasses to the glitteriest jewelry to the wildest hair. It's the kind of cheap glamour that I adore. We're not talking investment pieces here. We're talking about inexpensive to reasonably priced goods and services that create their own trendiness. When the goal is to be "of the moment," one doesn't want to have to pay a lot of money to be there. And moments change so quickly. Like Coco Coquette and her full-scale costuming, hairdressing, makeup, dancing, and performing extravaganzas. Of course, it helps that Allyson's mother, Jeanne Garro (front row at the show), is a former go-go dancer and showgirl who imbued her daughter with a love of all things glittery and glamourous. The last Coco Coquette extravaganza I saw was her Valentine's Day show, an adorably memorable feast of lightness, love, heartbreak, and redemption, with marvelously diverse costuming and performing by more than a dozen entertainers. Last week's extravaganza took on a darker theme, as it explored all the traditional tales of the apocalypses. With New Orleans' Chris Lane as the cynical and salty emcee Nostradamus (and for a short bit, a spot-on Michael Stipe), we saw fire, pestilence, and so much more. Sarah Marsh from Brass Ovaries (designed by Jessica Kitty Buick) illustrated global warming by performing as a stripper polar bear. Dallas doll Lula Houp-Garou hula-hooped the oncoming plague of locusts. Then the Ice Age came with its magnificent Snow Queen dress designed by Angeliska Polacheck, not to mention war, space aliens, robots, and the finale, a gorgeously bewigged troop of performers in 18th century gear choreographed by Ellen Stader, performing Queen's epic "Bohemian Rhapsody," showing it was all a dream. And it was a dream. A dream of a show, a dream of artistic vision, and a dream of a producer, Allyson Garro.

I would be remiss to not mention my friend Matt McGin­nis' annual Mellow Yellow fundraiser, a party to raise money for the Livestrong Challenge on Sat­ur­day, Oct. 6, 8pm, at Casa McGin­nis. Legendary DJ el john Select­or of Thievery Corpor­a­tion fame will provide the music to listen to while enjoying Texas-made wine, spirits, and beer. I love that Matt does this event. He has committed to raise $5,000 for the Lance Armstrong Foundation to fight cancer, and can do this with the support of friends like you. The price of admission to the party is a tax-deductible donation. No need to bring a wad of cash or a checkbook to the party (online at laf.livestrong.org/goto/mattmcginnis). Matt understands that giving is a personal matter, so he has personalized levels of donations by tying them to stories of friends who have successfully fought cancer. Matt has ridden the Livestrong Challenge for five years and adds another $100 for every year. This year he is asking for you to match his donation of $500, but other levels begin at $20. Be there, and bring your designated driver with you.