Too Much F*cking Glamour 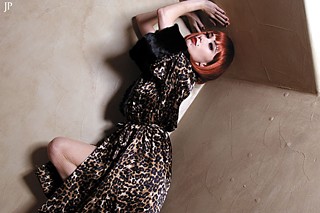 It's hard to remember everything that's happened in the past month, from the overload of creativity and frantic sewing that preceded my fall/winter preview at the Cattivo show, to the show itself, and the compliments, congratulations, and good reviews that followed. Barely able to take a breath, I spent several days getting ready for a photo shoot in which I was posing before the glorious Micky Hoogendijk's camera. Exquisite hair and makeup by Cat Lane, styling by Jonathan Shakarisaz, accessories by Kristin Bunyard of Ossuaria Jewelry, as well as the Sugar Factory (and a few of my own favorite pieces) ... the elements came together to create dreamy and outrageous portraits in the way I always wanted to look. Never before had I posed for such darkly glamorous photos with such a master behind the lens. I've posted many of the photos on my Facebook page, and they are also available at www.mickysees.com. Spending the day at Micky's (and her husband Adam Curry's) home was delightful – Adam being such a great host that when Micky shot me wearing my fur coat in their pool, Adam jumped in fully clothed to hold the reflector in the right place to light the photo. Jon Jon and I sat mesmerized while Adam told us stories that left us laughing hysterically and shrieking in delighted shock and awe. Meanwhile, Micky had begun to look at the photos, and when I glimpsed her work, I could hardly close my mouth, much less speak.

High on that glamour, Jon Jon and I were already making plans for Micky and Adam to be among the models to shoot my existing fall collection the next weekend. Bad JohnPaul Wilson was at the helm for this photo shoot that included not only Micky and Adam, but my gorgeous dear friend Eva Strangelove; Austin's hardest working and most beautiful model, Madison Paige; the exquisite rising star of modeling, Sydney Hancock; flame-haired Nicole Marie Verschoor; and Lucy Secord, who modeled much of my men's collection. I became possessed with making more clothes for the models to wear, and even made some of the finale pieces for my show in November.

It was a circus when we arrived – JohnPaul was already shooting another designers' work, so we hid out in one of the multiple bedroom suites of our hostess Lara Semmelmann's fabulous Westlake mansion. Makeup artist Jay Woods began painting faces, while wigmaker Allison Lowery began distributing wigs. Jewelry again by Ossuaria Jewelry and the Sugar Factory, and styling by Jon Jon Shakarisaz (who made so many trips up and down Lara's gracious but lengthy marble staircase that he should be in fabulous shape now). ... This time we used fiercely redesigned shoes from Roosevelt Cevallos (see his Facebook page Queen, Ro's Shoes for Gerlz) that amped up the photo shoot another notch. JohnPaul's shots were the stuff of dreams – like the high-glam photo spreads that the big couture houses use. I was delirious.

The following night, we celebrated Adam's birthday, all of us glammed out in my collection, in a night on the town. Of course, the best-laid plans can often go astray, as they did with us, but we survived it all, being primarily entertained at Elysium by owner John Wickham and his go-to guy Neil Diaz. Private seating for Elysium's Regression 80s Night party turned into a mob scene when it was announced that Adam Curry was in the house. This is the generation that was raised watching Adam's Headbangers Ball on MTV, and his fans at Elysium were legion. Soon we were overwhelmed by the attention and left for quieter quarters, which turned out to be the W ... just before they closed. Returning to Lara's house, we stayed up gossiping and ruminating over the recent events until exhaustion took over and we all retired to our separate suites. With too little sleep, packing up the horrendous mess we'd made the day before was a chore, and somehow, the glamour had grown a little gritty. I was ready for a real break ... which I'm taking now. Then it's back to the studio for a somewhat more peaceful continuation of designing my fall collection.