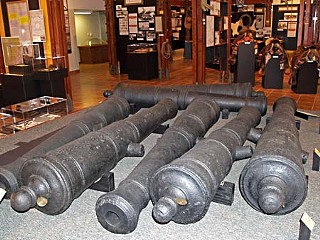 The Museum of the Coast­al Bend in Victoria houses seven cannons and other artifacts made by 17th century French craftsmen and carried to the Texas coast by René-Robert Cavelier, Sieur de La Salle.

La Salle had already explored a large portion of the Great Lakes Region and the Missis­sip­pi River, and named Louisiana for the King of France when he arrived on the Gulf Coast looking for the mouth of the mighty Mississippi to establish a colony. Unfortunately, he turned left when he should have turned right and wound up in Matagorda Bay, where La Belle and one other ship sank in 1686. La Salle was murdered by his crew near Navasota, where a statue commemorates his demise.

In 1995, the state of Texas set out to raise La Belle from the bottom of the bay. They eventually brought up more than a million artifacts, including the ship's hull. A year later, archaeologists uncovered Fort Saint Louis, the fated settlement of the shipwreck survivors, on the banks of Garcitas Creek where eight cannons were found.

The Museum of the Coastal Bend houses a sizable collection of the artifacts from La Salle's expedition, especially the fort. Other treasures and chapters of La Salle's story were distributed to seven museums along the coast. For details, go to www.texasbeyondhistory.net and click on "The Belle" on the map.