After a Fashion: The Wrap 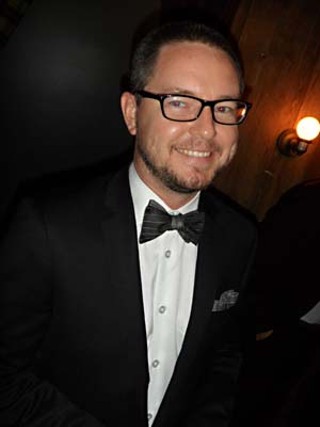 Austin Fashion Week has wound down, ending more than a week of parties, fashion shows, and related events. Attendance seemed bigger this year, and AFW continues to evolve. Evolution is a good thing in most cases, though often something can evolve in an unexpected direction that may not have the desired effect. Last week I ragged on the AFW launch party for being unrelated to fashion. It was geared to the sponsors and not the fashion crowd. But we already covered that, didn't we? I did not attend any of the Driskill runway shows or any of the showcases around town because I, like many other designers, was working madly day and night on my own collection and could not afford to take the time off. But I'd never dream of missing the Austin Fashion Awards. Though held at the unlovely Austin Music Hall, the fashion awards were indeed the best AFW has pulled off so far. Kendra Scott's jewelry collection was absolutely stunning, styled large for the runway and paired with jeweled headdresses. The presentation was so cool, so beautiful, and so perfect that it set the standard for what all Austin Fashion Awards presentations should look like. Another collection shown by one designer was more of a mystery, however, with the entire collection designed from a bolt of cheesy Halloween fabric. Maybe the audience didn't know it, but any designer who has been in a fabric store more than once has seen this fabric and recoiled from its cheapness and ubiquity. Not a great fabric for a show that had a large number of well-trained designers in the audience. Ross Bennett showed a collection that, as he told me backstage, was done in four days with two seamstresses. I understand that situation, but virtually every garment in this fairly cohesive collection had sewing problems. Puckered seams, visible hems, and wrinkled garments undermined what should have been a gorgeous collection, considering how long Ross has had to work on it, and considering its placement in the show. Ross' fame is because he was on a reality show, not because his design ability is so formidable. Unfortunately, the attention seems ill-deserved for what we've seen from him lately. Nonetheless, he did indeed deserve the Rising Star award he was given. If he keeps working hard, he will be good someday and worthy of this early attention. AFW has begun to recognize that fashion in Austin does not begin and end with them. In addition to giving out five Rising Star awards, they also awarded five Trailblazer awards for those who made their mark on Austin fashion, long before the Ross Bennetts started propagating. I was especially proud of the winners of those awards, and pleased that AFW founder Matt Swinney can reflect on the past while looking to the future. It was a tremendous honor for me to give the final award of the night to my dear friend Gail Chovan. As I said in my impromptu speech, "In the pantheon of beautiful women who make up my personal Fashion Hall of Fame, she is Goddess No. 1. She is the only real fashion star in Austin, a true trailblazer, and I'm so proud to call her my friend." Then it was on to the much-hyped afterparty. In a hellacious downpour that sent the beautifully dressed crowd running for their cars, the Austin Music Hall created the biggest trend of the night by providing clear plastic garbage bags for the attendees, as well as walkers with umbrellas to help people to their cars. Good work, Austin Music Hall! At the afterparty, Spectra, the work by Wes Lane at LIGHTfaktor, was dazzling, but the wet crowd coupled with the heat put a damper on the whole thing (pun intended). What was truly disappointing was René Geneva's much hyped fashion show featuring LED-lit dresses. If I recall correctly, only one of the dresses lit up, while the others suffered some malfunction that sent out rather dreary clothes bedecked with tubes and wires that did nothing. After having seen the magnificent LED-lit costumes from Cirque du Soleil's Michael Jackson The Immortal World Tour, Geneva's attempt seemed poorly planned. Having seen enough bad fashion, Jacki Oh and I decided that we just needed to go to sleep and forget it all.