After a Fashion: Feathers and Beads

Your Style Avatar on the Texas Tease 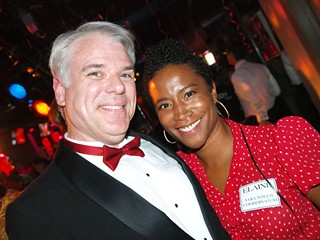 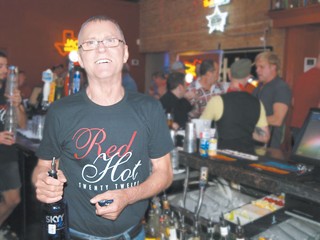 One of Austin's gay-est and longest-running annual fundraising events is Oilcan Harry's Red Hot, and one of its founders ranks among Austin's most beloved bartenders: Oilcan's Steve Higginbotham. Red Hot has raised more than $250,000 for Project Transitions over its 21-year run. (Photo by Seabrook Jones)

She sidled up behind me and said, "Well, you're the last person I'd expect to see here." Amused, I turned around and saw veteran performance artist Ruby Lamb for the first time in a number of years. Her comment was correct. There I was at Antone's (accompanied by my constant companion Jacki Oh) at a burlesque show. Of course, I feel right at home at Antone's, especially when the bewitching Ilsa Haynes is at the door, but I think even Ilsa was surprised to see me at something called Texas Tease: 80s Hair Metal Burlesque. Not a huge fan of watching women undress, I was really there to see our friend Eva Strangelove, the international burlesque sensation from New Zealand whose beauty, style, and grace take what we know as burlesque and return it to its roots. Not one to rip off her bra and shake her tits like a lapdancer, Eva and her gorgeous friend and fellow New Zealander, Sarah Marie Summer, are instead the epitome of classic burlesque, keeping the crowd simmering with their glamourous posing and prancing ... and saving the good stuff until the very end. They were both magnificent in their attire, creating a truly dreamlike atmosphere in the club, and the audience went wild over them. So, no, this was not your average burlesque show; it was a celebration of the female form divine.

At long last H&M (Hennes & Mauritz, in case you didn't know), the international retail giant with chic and affordable designer clothing, has announced that it will be opening a new 24,000 square-foot store at the Domain this fall. Though a first for Austin, it will be H&M's seventh store in Texas. Finally we'll have one. Let the chic begin.

So pleased to hear that Oilcan Harry's 21st Red Hot benefit for Project Transitions was a great success this year, raising about $16,500 for people living with HIV/AIDS. This was especially thrilling for PT, since, as some of its members were loading their van to set up the event at Oilcan's, they received the news that the United Way had just cut $45,000 in funding for PT, as part of $1.2 million in cuts. This is devastating for PT, because it means it is losing the funding for one month of direct services to the residents of its hospice, Doug's House. Fortunately, Oilcan's Larry Davis, Rob Faubion, Steve Higginbotham, Patrick Lynch, and all the Red Hot staff and supporters made the benefit a success. Steve Higginbotham founded the event over two decades ago; PT depends on benefits like this to help folks like Hurricane Katrina survivor, Robert, 74, accept his health issues, plan for end of life, and die with dignity in a supportive, homelike environment. It helps Carlos, 46, stabilize his deteriorating health, recover from drugs and alcohol, reconnect with family, and live independently in an affordable apartment. Though a great success, Red Hot raised only a portion of what PT needs to continue its wonderful work. You can go to www.projecttransitions.org to make a donation. Please.