Your Style Avatar falls for a 6'2" glamazon named Micky 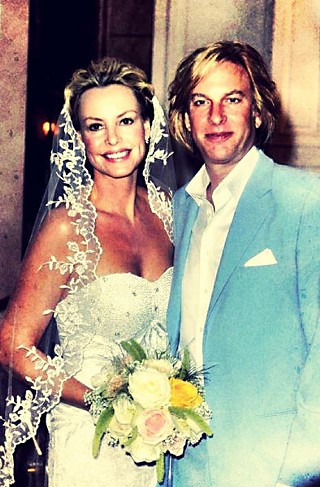 ALL YOU NEED IS LOVE

She was so beautiful, among so many beautiful people at Karen and Rick Hawkins' that night, that I simply couldn't take my eyes off of her. Blonde, Dutch, and 6 feet 2 inches tall, Micky Hoogen made my head spin. The Amsterdam beauty arrived in Austin recently with her fiancé Adam Curry in tow, and between the two of them, they're going to make a big social splash (at least if I have anything to do with it). My friend Jon Jon Shakarisiz was smitten, following her around like a besotted schoolboy and chatting up her charming fiancé. The first night at Karen and Rick Hawkins', it was all about Hoogen ... duh, and Karen too, for those of us enchanted by perfect female beauty. My photographer Seabrook Jones was there (we ran a photo of Karen and Micky Hoogen together). Seabrook's been to Amsterdam, and soon Hoogen was revealing her glamorous past to him, including having been creative director of Amsterdam's infamous Supperclub (bar, restaurant, and dance club), among so many delirious experiences, like modeling, art collecting, and all those glamour girl pursuits. So, I knew something about her anyway, but nothing about the guy she will be marrying. I remember thinking that when she had said her fiancé's name, I thought, "Oh, yeah. Like that guy on MTV a thousand years ago." Glad I didn't say it aloud, though, because he is that Adam Curry. But I didn't know that until the second time I met him. It wasn't your typical, "Oh, you used to be famous!" Curry still is famous. You just don't know it. If you've ever listened to a podcast, you can thank him for that – one of the pioneering developers of podcasts, Curry (known as the Podfather) was an early acolyte of the technology. He had the foresight to register domain names early (his is www.curry.com, which, if available today, would not be about him). My favorite story is about how he registered the domain name www.mtv.com before MTV ever knew what domains were. MTV was so not advanced that they declined to even buy the address from him. While hosting MTV's Headbangers Ball, he was becoming a much bigger star by being among the first celebrities to administer their own website. (Curry is apparently a huge media star in the Netherlands.) Jon Jon, Jacki Oh, and I went to Hoogen's birthday and the couple's farewell party at Steiner Ranch Steakhouse before they left for Amsterdam to get married. The couple have a slew of things up their sleeves when they return and you can bet on seeing and hearing about them again.

So, I received something new in the mail – the H-E-B beauty test by Cutex. I turned the kit over to my sister to try, and she gave it rave reviews for its excellent Cutex Baseworx Smoothing & Strengthening Base Coat with bio-ceramic technology, as well as the travel-size nail polish removers and a clever pen with several different tips for removing errant polish. Cutex has been a leading producer of nail care products since 1911, and launched the first nail polish (available in 10 shades) in the Twenties, revolutionizing cosmetics. Said my sister/lab assistant, "Despite the contemporary packaging, it was a trip down nostalgia lane and made me long for the days of my favorite Cutex colors Barely Pink and Nearly Nude." Good work on the Baseworx, Cutex. And better yet? It's only available at H-E-B.

Austin Fashion Week has nabbed Circuit of the Americas as a partner in the first Formula One fashion event, Shift Into Style (set for mid-August), which will combine the chic world of the Grand Prix, motorsports, and fashion. Our somewhat lackluster first lady of Texas will open the festivities, which will feature F1 cars and a timeline photo exhibition. It's a strangely mixed bag of retailers, designers, and manufacturers, though Keepers menswear can be counted on to provide sophistication. Tickets for the kickoff party and other fashion week events are available at fashionweekaustin.com/tickets.