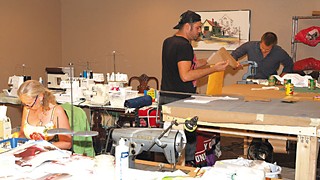 I've written that I'm trying to design again, and it is because of Benson Roberts and his White Star Manufacturing (www.facebook.com/WhiteStarManufacturing) partner Markhollan Swientek (and a few private investors), that I am designing again ... at least when I can handle it. White Star is a full-service production facility that can produce a single garment for one person, or hundreds of thousands of garments for big companies. It is currently financing the collection I'm cobbling together at its temporary headquarters. Some of the things White Star has up its sleeves will revolutionize Austin fashion. Will keep you posted!

Okay, am I the only one who is mortified by the Summer's Eve douche commercials? After the soft images and gentle patter, the slogan "Hail to the V" appears on the screen. Hail to the "V"? What "V"? Since there was no mention of any V-word in the commercial, I couldn't imagine what they were imploring us to hail. Hail to the Volvo, perhaps? The Vulcans? I know, I know – what they're really trying to tell us is to "Hail to the Void." Surely a douche company wouldn't be imploring their entire viewing audience to "Hail to the Vagina"? And, if by Hailing to the Vagina, they mean filling it full of their chemical product, perhaps suggestible viewers should see their gynecologist before Hailing to the V (which sounds like an ancient fertility rite in which men, women, and children scale a huge vulva – looking rather like a busy ant hill).

Wow, lots of response to my writing about my dad again: I received letters from people it touched, who'd had similarly horrific experiences. Father's Day was just an excuse to run that beautiful photo of my father when he was so handsome and young. The most riveting response was an email from my older brother, Scott, who shared many of my same memories of living with a mentally ill parent, and had plenty of his own as well – some I either had repressed or didn't know about. I rather blithely dismissed my brother in my column by mentioning that I lived alone with my dad with "my brother Scott having grown up enough for his own apartment, friends, and jobs."

Scott responded: "Nice column, the positive traits of dad's are indeed well remembered, especially the remedial piano playing, lol! I wish it was true that I had chosen to move out. It wouldn't have fit the theme of the column but the truth is that shortly after I had intervened in his Aspirin/paint thinner suicide attempt on Bettis St., he came to me and said he 'couldn't afford to care for me anymore.' The next day he took me over to Richmond Ave. and rented an apartment for me. After that first month, I was on my own. I had to get a dishwasher job at [a] TGI Friday's that had just opened up across the street. Other than the occasional family charity, that is how I paid rent and ate (bringing home table scraps). It may have seemed like some kind of abandonment, Stephen, but I assure you, it was a conscious and deliberate action by dad; I had no say in it. I was put out on my own at 17. I'd have stayed there with you if I could have. Sorry, Scott."

I was devastated, and replied to him, offering sympathy as well as shock, saying he had been my best friend, and yet I'd had no idea that happened to him ... or I'd simply repressed it. He wrote back saying, "I still believe he did it so he could finish the job with less chance of being stopped; he cursed me so much for stopping him on Bettis. Yeah, we really didn't have anyone but each other. Always, Scott." How different our realities were regarding the same subject. We'd shared so much, but we'd both obviously had our own personal experiences as well. I regret unearthing my brother's tragic tale, but it was cathartic for us to talk about it (though I remain mortified that I glossed over such an anguishing detail). It's just another broken shard from the shattered picture that was our youth.