The Luv Doc: What a Man Drinks

Only a dumbass would let another man make his liquor 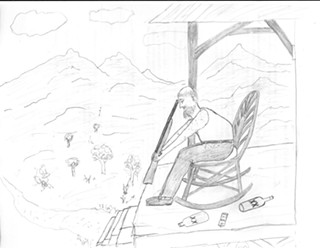 Luvdoc,
My friend Jeff says that the only real drink for a man is whiskey. I say it is beer. Which one of us is right?
- Chugger

Chugger – you have obviously mistaken The Austin Chronicle for Details magazine. It's an easy enough mistake to make … what with all the hot metrosexuals tooling around this place, wearing unbuttoned shirts exposing their ripped abdominals. Even still, beneath all the gloss and glamour and steely-eyed, smoldering looks at the water cooler, we're still just a humble alternative weekly with a surprisingly impressive brush pile in our back lot – so big in fact we suspect that somewhere within it there are actually Sleestacks (don't sweat that last ref bro, it's just a bon mot for the soul-patched geriatrics who actually read our paper). Anyway, even though pretty much everyone here would agree that advice on manliness really isn't our journalistic bailiwick, I do feel somewhat qualified to give advice on alcohol, having explored its possibilities in an embarrassing varieties of ways. Let me start by putting your lover's quarrel to bed right now: A real man drinks Everclear ... but ... only after the revenuers blow up his still. Why? Because only a dumbass would let another man make his liquor. Yes, that means both of you are wrong. Nonetheless, once you own the notion that your estrus might be in fuller bloom than say, the average man's – or even Tim Gunn's (if that name even looks familiar, manliness test = fail), you can, in the words of macho Texas gubernatorial candidate Clayton Williams, just "relax and enjoy it."� Belly up to the bar and order a Cosmo or an Appletini or a Michelob Ultra, or even a Jager bomb ... and don't worry that the last drops of your testosterone are running down the inside of your thigh. Trust me. The macho drinking bar has been set impossibly high. You don't want to have to live up to that. You don't want to end up cutting off your ear like Van Gogh or ventilating your frontal lobe with the business end of a shotgun like Hemingway. Truth is, any alcohol will make you more macho. Why? Because alcohol makes you stupid, and stupidity is the key ingredient in machismo. That said, carry on fellas. Do all the beer bongs and whiskey shots you want and try not to sweat the whole manliness thing. You either have a dick or you don't.
Need some advice from the Luv Doc? Send your questions to the Luv Doc, check out the Luv Doc Archive, and subscribe to the Luv Doc Newsletter.
More The Luv Doc columns