From MJ to generators fueled by human waste, Your Style Avatar flits around the world 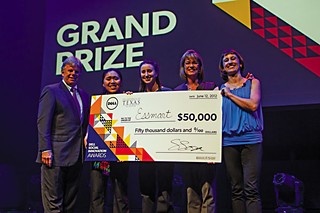 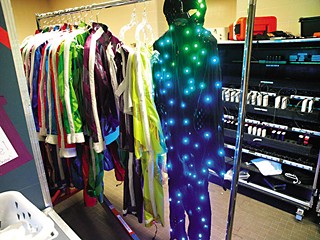 One of the ethereally lit Cirque du Soleil costumes (LED of course) in front of the bank of chargers worn to power the costumes. (Photo by Seabrook Jones/www.juicythis.com)

Naturally, since it was at the W Hotel, my partner-in-crime Jacki Oh and I dressed in chic cocktail wear for the preparty for the Dell Social Innovation Awards last Tuesday night. Forgetting that we were among a more tech-oriented crowd than I typically run with, I wore a faaabulous bright, vintage white linen suit. Paired with a black lace shirt of my own design and acres of turquoise jewelry, the suit looked very glam. Jacki was resplendent in a Sixties-inspired go-go dress, with brilliantly colored waves of flat sequins. Newly platinum blonde, Jacki turns heads wherever she goes. We both stuck out like dazzling sore thumbs. The Dell Awards are given to nonprofits across the world. The Moody Theater was packed, and the presentations were genuinely inspired – from a non-electric water filter that takes the arsenic out of the water in Bangladesh to a polymer binding agent that encases vaccines, enabling them to survive without refrigeration and therefore serve hundreds of remote locations without electricity. There was even an award for an electrical generator that runs on the methane generated by human waste. The winning project is from Essmart Global, which helps the thousands of mom-and-pop stores across India carry useful items like LED lanterns instead of the unsafe, yet still typical kerosene lamps. With hosts and judges that included the Vice President of Corporate Social Responsibility at Dell, Trisa Thompson; active investor, civic leader, and philanthropist Tommy Meredith (and his always gorgeous wife Lynn); Dell Social Innovation Challenge Executive Director, Suzi Sosa; chairman and CEO of Silverback Enterprise Group, Jack McDonald; dean Robert Hutchings of the Lyndon B. Johnson School of Public Affairs at UT; and Andi Scull, founder and president of the Helping Other People Everywhere Campaign and HOPE Events, Inc., I was awestruck – inspired by seeing the future happen before my very eyes (and dinner at Trace at the W was sublime). Post-event, Jacki and I caught up with the delightful Billy and Melanie McLeroy, owners of Taurus doggie day care, and lingered long into the evening bonding and trading secrets at Taverna.

I received an absolutely lovely invitation to take a backstage tour down in the bowels of the Frank Erwin Center to view the backstage machinations behind Cirque du Soleil's sold-out, one-night-only event, Michael Jackson: The Immortal World Tour (thank you, Lisa Newton!). What we saw was truly fascinating: gorgeous costume design and construction; staggering wigs; the chimp mask for Bubbles (authentically creepy!); and the hundreds of trunks of jaw-dropping makeup, accessories, headwear, and stage equipment. We attended the Spotlight preparty and were then ushered to our seats. Was it the very best Cirque I've ever seen? No. Was it an eye-popping, ear-splitting extravaganza? Hell. Yes. The dancers, contortionists, and aerialists were signature Cirque, but the story of MJ was told in an abstract and vaguely confusing series of graphics, quotes, and songs. We saw remarkably little of Michael Jackson himself, but many diverse allusions to his iconic stature and signature moves. Mildly flawed but ultimately riveting.