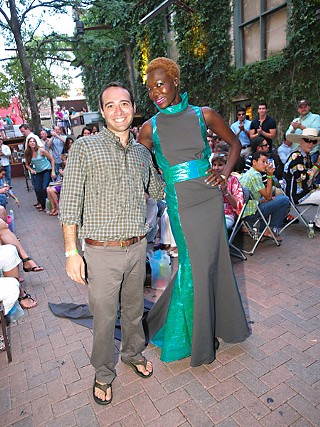 Designer Roberto Valentin (aka Robert Salinas) and model Beatrice Lawrence at the debut of his fashion collection, a benefit for American YouthWorks. (Photo by Seabrook Jones/www.juicythis.com)

I miss my dad Willard Cummings Moser all the time, even after 38 years. I miss his knowledge and humor. I miss his remedial piano-playing and singing. I miss his flamboyance and his camaraderie with his students at Trinity in San Antonio. And I miss the life that our family had that seemed like a dream for a few minutes. I've mentioned before that my dad died by his own hand when I was 16. I was living alone with him then, my brother Scott having grown up enough for his own apartment, friends, and jobs. When my dad died, I didn't know what to do with myself. His best friend Joanie Whitebird took me in, bought me a sewing machine, and took me to see Mahogany (starring Diana Ross as a fashion designer). I was besotted. I got a job at the legendary Hire's Fabrics in Houston, and with access to gorgeous fabrics, I became the worst tailor ever – but still managed to sell clothes to people who knew less about fabric than I did. Obviously, over the years, I trained, studied, interned, and sewed, sewed, sewed. Eventually I left designing behind me. With trepidation, I have puttered around with design over the last year. My skills are rusty, but my mind is not. As I am beginning to design some of the most creative pieces of my life, I find I miss my father terribly. He was such a peacock himself, unafraid of what others would think of his clothing choices. It was clearly a trait I inherited from him. God, he'd love some of the things I've drawn up recently – and God, I miss him for not being able to be here and see what his confused and disturbed young teenager has become. I think he'd be proud. To him, and to all dads out there, Happy Father's Day.

A week ago Saturday, I attended the Austin debut of two collections by design newcomer Roberto Valentin (aka Robert Salinas) at the American YouthWorks benefit. The self-taught designer showed Spring/Summer and Fall/Winter collections. Turns out the Spring/Summer set was shown in Dallas earlier in the year, but since it is in season now, he showed it again here. A combination of brightly colored knits, the designs were imaginative and detailed (perhaps too detailed – many younger designers tend to put all their ideas into a single style), with a tropical, ethnic feel. As silhouettes, the designs were fine, but close inspection showed sewing, cutting, and fitting problems. To me, it was a fairly typical debut collection from someone with no professional training. Fall/Winter was a different approach entirely, with more formal styles, glitzier fabrics, and more experimental silhouettes. Again, overlooking some major technical problems with the clothes, it's clear that Valentin does have an eye for style, but greatly needs to improve his skills. With a bit more training in fabric selection, cutting, sewing, and fitting, he may well morph into another Austin designer to keep your eyes on.