After a Fashion: American Idle?

Let Your Style Avatar's personal plight be a warning to you about the dangers of ... reality TV 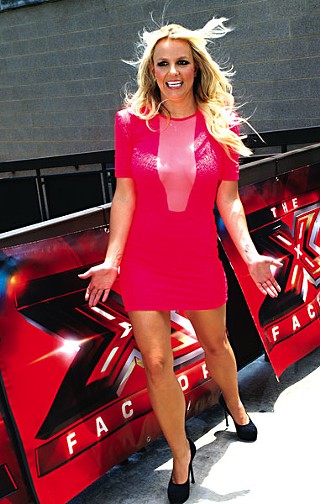 Also on the reality TV front, Britney Spears was in town for the X-Factor auditions at the Frank Erwin Center. (Photo by Seabrook Jones/www.juicythis.com)

I've spent the last few weeks recovering from the few weeks before that when I thought I was Superman and attended every event I could get a ride to. Big mistake – and I'm paying for it dearly now by being practically bedridden (in my Craftmatic Adjustable Bed) and forced to watch reality shows as penance. My mom's addicted to American Idol, so I watch it with her regularly. Idol, indeed. Why not just call it White-American Male Guitar-Playing Idol since that's who has won for the last six seasons? Word is that Jennifer Lopez will be leaving the show. Lopez should kneel down in her Louboutin platform boots and kiss the filthy ground at the feet of Ryan Seacrest for having her on his show. Her career had tumbled to the degree that she seemed a mere caricature of herself – and a bit of a joke – and to see her wind up on the panel of a tired reality show (yes, American Idol's rating dropped 25% in competition with The Voice, which is a far better show – except that we have to see and hear Christina Aguilera every week) seemed the coup de grâce. The panel of Jennifer Lopez, Steven Tyler, and Randy Jackson was wildly successful ... until you actually listened to the comments coming out of the mouths of Lopez and Tyler. "You knocked it out of the ballpark." "You took it to the next level." "You're in this to win it, aren't you?" The panel would always complain of pitchiness among the contestants, and bile would rise up in my throat: Did you hear Steven Tyler sing the National Anthem recently? His voice defines the word "caterwauling." For someone with a voice like that to criticize someone else for being pitchy is not only mind-numbingly contradictory, but simply appalling. So, go ahead J.Lo, and take your extensions and mink eyelashes to another show, you ungrateful sow. But please take Steven Tyler with you (even though I do like the clothes he wears). While we're on the subject of reality shows, there's Khloé & Lamar which just had its final finale so "Khlo" can take care of her marriage instead of gallivanting across the country with her sisters trying on makeup. If I recall correctly, it was only several weeks ago that I read that E! had decided not to pick up the show for another season. Shortly after that we're hearing "Khlo" announce that she's decided not to do it anymore and to get her life back. But she's still on the new season of Keeping Up With the Kardashians which proves that she's not going to fade from the limelight that quickly – just at the natural pace in which all Kardashians will disappear. For me, the enjoyment from watching the Kardashians is that it makes me feel like a superior being. I can hardly get started on Toddlers & Tiaras. These child strippers are bad enough – but it's the poor kids' moms that should be dragged to the firing line. My recent favorite show to gape at is Say Yes to the Dress, a truly superficial show illustrating the dangers of heterosexual marriage. Bride comes into store – attended by 13 bridesmaids, maid of honor, matron of honor, mother, and mother-in-law – to pick out the dress for the "most important day of your life." And every one of those women seem to lose all composure and decency when they enter a bridal salon. With every single one of those women registering their opinions on each dress that comes out, there can't possibly be a consensus. Then the tears start flowing and a senior salesperson has to step in and remind the bride that it is her day and no one else's. Bride-y finally gets the gumption to put on the dress she really wants and announces the choice amid cheering, booing, crying, insults, etc. Animals. So when they say, "Your wedding dress is the most important garment you'll ever wear," I disagree. The most important garment you'll ever wear is an adult diaper.