Letters at 3AM: Katniss Everdeen's Grandmothers 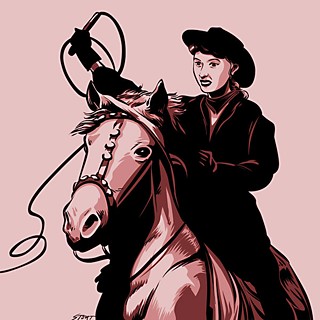 Barbara Stanwyck, clad all in black, gallops across the screen at the head of her gang of gunfighters in Sam Fuller's Forty Guns (1957). Stanwyck's Jessica Drummond is praised in song as the "high-ridin' woman with a whip."

She had played tough Western women before in Cattle Queen of Montana (1954) and The Maverick Queen (1956), but those pictures pale beside Forty Guns. Fuller's script turned traditional definitions of women upside down, and Stanwyck's trademark mix of toughness, vulnerability, and brains made Jessica seem not aberrant but inevitable.

Stanwyck came up in the 1930s, a decade still unequaled for its actresses and the central role they played in that Hollywood era. The roster speaks for itself: Bette Davis, Joan Crawford, Katharine Hepburn, Jean Harlow, Mary Astor, Myrna Loy, Marlene Dietrich, Jean Arthur, Carole Lombard, Rosalind Russell, Ida Lupino, Ginger Rogers, Joan Blondell, Vivien Leigh, Claudette Colbert, Wendy Hiller – their characters were women in a man's world who felt no need to conceal their intelligence and range. In scripts written with the literate zest of that Hollywood era, these actresses played women who met men eye-to-eye. Their era still spoke of the "weaker sex," but their performances challenged boundaries. Their stances said lots that their scripts could not.

By the Fifties, with rare exceptions like Forty Guns, Hollywood gave actresses far less leeway and screenplays were, in general, not as clever. Marilyn Monroe, Elizabeth Taylor, Audrey Hepburn – and lesser lights like Doris Day, Debbie Reynolds, and Kim Novak – were strapped in tightly by their roles. For instance, Taylor's best performances were as a loyal wife (Cat on a Hot Tin Roof, 1958) and a haunted prostitute (Butterfield 8, 1960).

Monroe played a showgirl in six of her 10 starring roles. In one of the remaining four, The Seven Year Itch (1955), she doesn't even have a name. In the script, she is "the Girl."

But change was afoot. On The Avengers, a British series (1962-68), Honor Black-man's Catherine Gale fought like a man, while on America's Route 66 (1959-1964), actresses like Lois Nettleton and Lois Smith played women stepping bravely into existential labyrinths in which the Minotaur is oneself.

Then, in 1964, Honor Blackman starred in the James Bond classic Goldfinger as Pussy Galore (pronounced "POO-sy"). Pussy was almost as tough as Bond. In 1965, Diana Rigg's Mrs. Peel took over The Avengers and American viewers saw, for the first time, a beautiful, erudite, hip, high-class woman who kicked ass.

Could a female equal a male on traditional male turf? The Avengers didn't deign to entertain the question. It asked: Are you Emma Peel's equal?

The answer: Not on your best day.

That hadn't been done before.

Then Faye Dunaway played a Vogue version of poor white trash in Bonnie and Clyde (1967), in which Dunaway was more than the equal of Warren Beatty's glamour-puss Clyde. (The real Clyde and Bonnie were homely, ignorant sociopaths.) The film's fashionable murderers were fashionably murdered – in slow motion, yet. But Dunaway's performance let us all know that Bonnie was more dangerous than Clyde.

While Vanessa Redgrave played a dancer (Isadora, 1968) and Jane Fonda played a hooker (Klute, 1971), gutsy Raquel Welch tried her damnedest to expand the roles possible for star actresses. Welch played Gore Vidal's transgender Myra Breckinridge (1970), then a woman who must learn to gunfight in the Western Hannie Caulder (1971), then, a Roller Derby gal in Kansas City Bomber (1972). Pam Grier played tough in Coffy (1973) and Foxy Brown (1974). But it was Angie Dickinson who definitively broke the mold in the TV series Police Woman (1974-78).

The first actress to single-handedly carry an hour-long TV series, Dickinson's Sgt. "Pepper" Anderson was a cop when few real-life women could be – and those few often weren't allowed guns and didn't leave the precinct. Dickinson's glamour had an edge. You hoped she'd never lose her temper, at least not at you. The same was true of Gena Rowlands when she took on the mob in 1980's Gloria.

TV's Cagney & Lacey (1981-88) was a different story. The cop team of Tyne Daly's Mary Beth Lacey and Sharon Gless' Christine Cagney looked like real people: attractive, but not especially pretty. They portrayed fairly average women who happened to be cops. They did what was supposedly a man's job, and they did it for seven seasons.

In TV shows from the Eighties on, women could be lawyers and doctors without overtly threatening the male realm – covertly, yes, but not overtly. However, danger is supposedly the province of men (a laughable assumption, since women have always been in greater danger, usually from men). The male hero is heroic by virtue of facing violence. If women could do that just as bravely, thousands of years of tradition would wobble and crack.

In TV's Silk Stalkings (1991-1999), Mitzi Kapture's Rita Lee Lance and Rob Estes' Chris Lorenzo partner as detectives. They call each other "Sam." Their equality is total. He trusts her to cover his back; she trusts him. That was new.

Today every cop or spy show features a woman who's witty, pretty, and can beat you up. Cote de Pablo's Ziva of NCIS is the prime example. As they say, "Ziva doesn't need a weapon. Ziva is a weapon." But before Ziva and her sisters, to be a credible warrior, a woman needed special powers.

In Xena: Warrior Princess (1995-2001), Lucy Lawless' Xena and Hudson Leick's Callisto do what cannot be done, but the show sneaks in Renée O'Connor's Gabrielle and arcs her from clever sidekick to sexy knife-fighter. In Buffy the Vampire Slayer (1997-2003), Buffy (Sarah Michelle Gellar) and Faith (Eliza Dushku) are endowed with powers, while Willow (Alyson Hannigan) arcs from girl-next-door geek to lesbian shaman.

Leave it to science fiction to provide more realism. Babylon 5 (1994-98) and Battlestar Galactica (2004-09) assume female equality in all spheres. Women are ace pilots: Galactica's Katee Sackhoff as Starbuck. Women are tough foot soldiers: Babylon 5's Marie Marshall as Dodger. Women are leaders – Babylon 5's Mira Furlan as Delenn and Battlestar Galactica's Mary McDonnell as President Laura Roslin. See them today and they mirror our female military in Afghanistan and Iraq, the prime minister of Germany, and our secretary of state. The zeitgeist has changed and there's no going back.

Since January, Lost Girl's Bo, played by Anna Silk, is a bisexual succubus crime-fighter – Lillith as heroine! Apparently, at our stage of development, a bisexual heroine must be freakish and sexy, as is Lisbeth Salander in The Girl With the Dragon Tattoo.

But The Hunger Games signifies change at a higher level.

Jennifer Lawrence is that rare performer who conveys character almost magically through the subtle medium of her presence. Her Katniss Everdeen has no inhuman powers. A skilled archer, she sometimes misses. She's not overtly sensual. She's profound without profound dialogue. She wins through decency, depth of spirit, and intelligence. In Raymond Chandler's usage, she walks her leafy mean streets neither tarnished nor afraid. Her determination defines her, not her gender. She makes her own rules in the face of a faceless, merciless power. Her grandmothers in cinema would be proud. When she wins, they win.

A great distance has been traversed. In a world that snares and defines you for its own dark purposes, Katniss Everdeen embodies what it means to define yourself and be free.

Katniss Everdeen, The Hunger Games, women in film and television