Letters at 3AM: A Pattern of Subversion 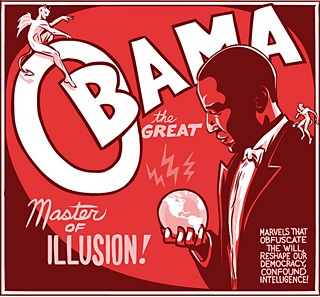 Let's do this chronologically and begin less than two months into Barack Obama's administration, when this president issued his first flurry of signing statements.

The New York Times, March 12, 2009, p.18: "[Mr. Obama] ... raised concerns about a section that establishes whistle-blower protections for federal employees who give information to Congress. ... Many of Mr. Bush's signing statements made arguments similar to those made Wednesday by Mr. Obama."

In an editorial response on March 17, 2009, the Times scolded, "Mr. Obama should not use signing statements, as Mr. Bush did, to assert that his own interpretation of the Constitution trumps those of Congress and the courts."

The Times rang the alarm louder on March 22, 2009, p.WK7: "Mr. Obama's lawyers did not seem to rule out indefinite detentions. ... Worse, they seemed to adopt Mr. Bush's position that the 'battlefield' against terrorism is the planet. ... [T]he Justice Department ... abandoned transparency just last month in a case before the United States Court of Appeals for the Ninth Circuit. ... The Obama administration advanced the same expansive states-secrets argument pressed by Mr. Bush's lawyers to get a trial court to dismiss the case without any evidence being presented. Even the judges seemed surprised, asking whether the government wanted to reconsider its position."

The Times, July 2, 2009, p.14: "'President Obama may mouth very different rhetoric,' said Anthony D. Romero, executive director of the American Civil Liberties Union. ... 'But in the end, there is no substantive break from the policies of the Bush administration.' ... Mr. Obama has also continued other Bush-era policies ... like the C.I.A.'s 'extraordinary rendition' program."

The Times, Aug. 8, 2009, p.16: "President Obama has issued signing statements claiming the authority to bypass dozens of provisions enacted into law since he took office. ... In 2006, the [American Bar Association] called the practice unconstitutional."

The Times, Oct. 26, 2009, p.22: "The Obama administration has repeated a disreputable Bush-era argument that the executive branch is entitled to have lawsuits shut down whenever it makes a blanket claim of national security. ... The objective is to avoid official confirmation of wrongdoing that might be used in lawsuits against government officials and contractors."

The Times, Jan. 21, 2010, p.39: "Though the president deserves praise for improving matters [regarding torture], the changes were not as drastic as most Americans think. ... Americans can now boast that they no longer 'torture' detainees, but they cannot say that detainees are not abused, or even that their treatment meets the minimum standards of humane treatment mandated by the Geneva Conventions." Former Air Force interrogator Matthew Alexander wrote that under Obama's guidelines, "If I were to return to the war zones today ... I would still be allowed to abuse prisoners."

The Times, May 27, 2011, p.17: "Senator Ron Wyden, an Oregon Democrat and a member of the Intelligence Committee, said that the executive branch had come up with a secret legal theory about what it could collect under a provision of the Patriot Act that did not seem to dovetail with a plain reading of the text. 'I want to deliver a warning this afternoon: When the American people find out how their government has secretly interpreted the Patriot Act, they will be stunned and they will be angry.' ... Another member of the Intelligence Committee, Senator Mark Udall, Democrat of Colorado, backed Mr. Wyden's account, saying, 'Americans would be alarmed if they knew how this law is being carried out.'"

The Times, June 18, 2011, p.1, in a report about "the Obama administration's unprecedented crackdown on leaks": "The Justice Department shows no sign of rethinking its campaign to punish unauthorized disclosures to the news media, with five criminal cases so far under President Obama, compared with three under all previous presidents combined. ... In particular, critics of the leak prosecution question the appropriateness of using the Espionage Act, a World War I-era statute first applied [by Richard Nixon's administration] to leaks in the Pentagon Papers case in 1971."

Also on June 18, 2011, and also on p.1: "President Obama rejected the views of top lawyers at the Pentagon and the Justice Department when he decided that he had the legal authority to continue American military participation in the air war in Libya without Congressional authorization."

The Times, June 19, 2011, p.WK7: "Instead of tightening rules for F.B.I. investigations – not just of terrorism suspects but of pretty much anyone – that were put in place in the Bush years, President Obama's Justice Department is getting ready to push the proper bounds of privacy even further. ... Under the new rules, agents will be allowed to search databases without making a record about it [and] agents will be permitted to conduct lie detector tests and search people's trash as part of evaluating a potential informant. No factual basis for suspecting them of wrongdoing will be necessary. ... The White House cares so little about providing meaningful oversight that Mr. Obama has yet to nominate a successor for Glenn Fine, the diligent Justice Department inspector general who left in January."

The Times, June 27, 2011, p.21: "In early 2009, members of Congress enthusiastically introduced the Whistle-Blower Protection Enhancement Act. ... Although as a candidate Mr. Obama expressed support for such a law, his administration cooled to the idea and let it die in the Senate in late 2010. ... In what seems to be a recurring theme, Senator Obama supported the Free Flow of Information Act, but President Obama does not."

The Times, Oct. 6, 2011, p.34: "By a 6-to-6 vote last month, the United States Court of Appeals for the Second District cleared the way for a legal challenge against a dubious legacy of the George W. Bush administration: the wiretapping of Americans' international communications without a warrant or adequate judicial supervision. ... The tie decision, which allowed an earlier ruling to stand, was a well-deserved setback to the [Obama] Justice Department's accountability avoidance strategy."

The Times, Sept. 28, 2011, p.1: "The Federal Bureau of Investigation is permitted to include people on the government's terrorist watch list even if they have been acquitted of terrorism-related offenses or the charges are dropped ... The database now has about 420,000 names, including about 8,000 Americans."

The Times, Oct. 9, 2011, a headline on p.1: "Secret U.S. Memo Made Legal Case To Kill a Citizen." Read on: "The secret document provided the justification for acting despite an executive order banning assassinations, a federal law against murder, protections in the Bill of Rights, and various strictures of the international laws of war."

As I've documented previously, on Dec. 31, 2011, Obama signed the National Defense Authorization Act, permitting the military, at his order, to arrest designated enemies – including American citizens – without warrants and hold them indefinitely without trial. The night Obama signed that bill, American Civil Liberties Union Executive Director Anthony Romero said, "He will forever be known as the president who signed indefinite detention without charge or trial into law. Any hope that the Obama administration would roll back the constitutional excesses of George Bush in the war on terror was extinguished today."

The Times online, March 5: "Attorney General Eric H. Holder Jr. asserted on Monday that it is lawful for the government to kill American citizens if officials deem them to be operational leaders of Al Qaeda."

The Times online, March 10: "President Obama, who came to office promising transparency and adherence to the rule of law, has become the first president to claim the legal authority to order an American citizen killed without judicial involvement, real oversight or public accountability."