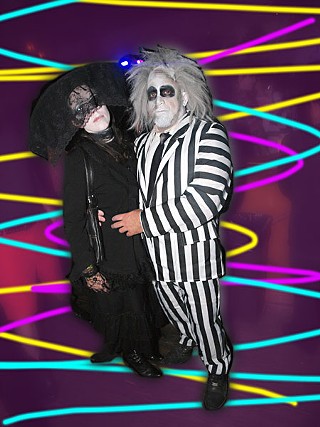 I've waited a couple of weeks to see how this new NBC designer reality show would play out. By the time you read this, the third episode will have aired, and things should become a lot more cutthroat. The show is hosted by former model Elle Macpherson, whom we don't have to see a lot of, fortunately. There is a panel of fashion, um, experts who critique the designers' work – John Varvatos, who really is a fashion expert; Nicole Richie, the original "pig in lipstick"; and the woman whose name is synonymous with couture and all things exclusive, Jessica "Chestica" Simpson. Smirk, smirk. The designers pick a single garment to encapsulate their design philosophy and produce it in different fabrics and colors. The panel of experts make their suggestions, then the designers have to face actual buyers from department stores who will either bid on the garment or hit the dreaded "No offer" button. On the second show, one designer sold her dress for $110,000, but many designers sold nothing at all. One designer goes home every week.

One such designer is Oscar Fierro from Lewisville, Texas. I don't know what bridge in Lewisville Fierro lives under, but he is indeed a tiny Hispanic troll with a staggeringly massive ego, limited talent/skills, and a design philosophy that seems to be geared toward prostitutes. His revoltingly animated personality includes a little routine of spinning and dancing around, clapping his hands after every single stitch he makes. Fierro didn't fare too well on the first episode, eliciting no offers. Among the three lowest scores, shockingly, he was saved from elimination; the experts thought there might just be potential. Episode two proved them dead wrong. He showed even more hoochie mama dresses and was summarily booted from the show amid copious weeping and blabbering about how he has to support his family, had to leave his dog in Texas, and pay his mortgage. Whatever, princessa. We all have problems. Hasta la never, bay-bee.

There's another designer from Texas, Ross Bennett. I like Bennett very much – a pleasant, affable, well-spoken guy whose graduation project from UT was among those I judged a few years ago. No doubt there's talent there, but Bennett's countrified, down-home, "Golly, I'm just a redneck straight guy who likes to hunt and fish and shoot guns ... and design dresses" is tired. Cute story, but you can't put your story on a hanger in a department store. Bennett further blathered on about his exquisite training under the finest tailors, his flawless fitting, his jaw-dropping client list (really?), and generally sounded conceited. We were stoked. In the first episode, Bennett came up with a pair of high-waisted, wide-legged pants that should have been beautiful. However, for all Bennett's claims about perfect fitting and tailoring, the pants looked like they had been designed by a rank amateur. Strangely baggy through the hips and butt, the pants grabbed the crotch, creating serious camel toe, accentuated by a selection of fabrics that was inappropriate for the style. The panel roundly excoriated him, with Varvatos saying that it looked to be from another era, and not in a good way. Chestica blabbered something, and that paragon of beauty and style, Richie, couldn't get over the fact that the pants grabbed too much of the vagina. The buyer from Saks Fifth Avenue said that the fit and tailoring skills Bennett boasted about were simply not in evidence. The editing of the program, always a key factor in how the audience views the show, may have been geared to make Ross look silly, showing him drenched in sweat and wiping tears from his eyes. Episode two was a relative improvement. He designed a very Alexis Carrington-type suit in tweeds and bouclé. For spring. At least here Bennett's claims of exquisite fit and tailoring were evident, but once again there were no offers, and the experts and buyers questioned his fabric choices. Once again, he was in line for elimination and barely escaped. We'll have seen episode three by the time this column comes out, and I look forward to a huge turnaround in Bennett's fortunes. I want him to make Austin proud. I know it's a tall order ....