Letters at 3AM: Mabel Normand After 100 Years 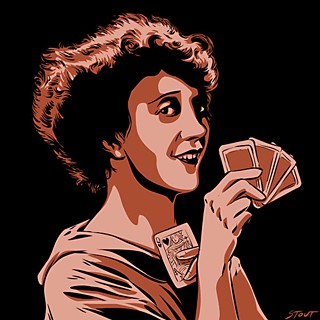 Once upon a time, Mabel Normand was a movie star who preferred ice cream for breakfast, often with apricot brandy. It's doubtful she finished the sixth grade, but she read voraciously, a thesaurus always in reach, favoring Police Gazette and any book by Sigmund Freud. She possessed an exhaustive knowledge of geography and studied French for fun and for years. She weighed about 100 pounds and was barely 5 feet tall but was no "frail," as the usage went back then – boxers taught her to box, cowboys taught her to bust broncs, aviators taught her to fly biplanes. She performed all her own stunts, from acrobatic swimming to bone-breaking pratfalls. Her practical jokes were compulsive and sometimes life-threatening, but there is no record of anyone staying angry at her very long, for she was one of those sad people who have the knack for making others feel joy. She could look sultry, impish, glamorous, homely, like the girl next door or hustler's moll while somehow always looking completely herself. Her private life was private enough that no one is quite sure about it to this day. Nor is her birth date certain. Various sources cite November 9, 10, or 11 of 1892, '93, '94, or '95. Her friend, silent movie star Constance Talmadge, summed her up as well as anyone: "Mabel was just – Mabel."

One hundred years ago, Mabel Normand and Mack Sennett broke through to something new – new not only to American cinema but also to Western culture. They probably finished processing and shipping their little masterpiece just about a century ago today, around March 23, in time to make its scheduled release date of April 1, 1912, a date that has not gone down in history but deserves to.

The film was "Oh, Those Eyes!," a one-reel, 8½-minute, comic "flicker" – the kind of cultural artifact that even flickermakers like D.W. Griffith thought of as low entertainment for the uneducated. Sadly, most cultural and cinema historians have agreed. But watch, or anyway, read:

Mabel, maybe age 16, maybe 19, steps from her house dressed like a proper woman of the day, clothed from head to foot. She looks this way and that. Then she rolls those big eyes at the camera and sets off on her walk. As she strolls along the boardwalk of Venice, Calif., every man who sees those eyes falls for her and follows her – which wouldn't be playable if the camera didn't love her so much. By the time she reaches her father's office, several men are in attendance.

Then the plot unfolds. Her father has two male secretaries. Both propose marriage. Mischievously and outrageously, Mabel accepts both proposals. When her father finds out, he's vastly amused. The title card reads, "We'll teach her a lesson."

A 1912 audience expected the flicker to end with Mabel's comeuppance. She's behaved improperly; propriety must be restored. That was the formula they were used to.

Father and suitors stage a phony duel in which both young men appear to die. Mabel may or may not be wise to it, but either way she's flustered and runs off. The men chortle and go searching for her.

Title card: "Taught." We see Mabel sitting beneath a tree with a bear. She hugs and cuddles the bear. Feeds it. Loves it. The men find her. The bear looks toward them. The men run away. Mabel and the bear cuddle some more. The end.

Where did the young lady of "Oh, Those Eyes!" come from? Can you find another like her in Western storytelling prior to that time?

Her bear would be merely surreal if it were a special effect, but it's a bear. She's doing what you see her doing. Viewers feel a stunned surprise. She's broken all the rules, is happy about that, isn't made to pay a price – and apparently because of this, a bear loves her.

Sennett and Normand knew they had something. You can feel their excitement in their next films. After satirizing D. W. Griffith's damsel-in-distress plots in "Help! Help!" (April 11, 1912), they play up their new theme in "The Brave Hunter" (April 22, 1912). Not as direct and surprising as "Oh, Those Eyes!," but again there is the bear, again the brave male hunters run, and this time Mabel and her bear dance, walk paw in hand, and she rides on her bear's back.

Normand and Sennett were establishing a female character not limited by the expectations of men or respectable society. In 1912, this was a big deal, made bigger by the popularity of their films.

These Normand-Sennett collaborations were produced by Biograph, a company dominated by the tastes of its star director, D.W. Griffith. Sennett worshipped and resented Griffith. Griffith tolerated and resented Sennett. Sennett learned from the mastery of Griffith's technique, but he thought Griffith's silent melodramas were inherently ridiculous and said so. Sennett chafed when Griffith would not allow him to make comedies that flouted public authorities (like the cops) or transgressed conventional morality; Griffith didn't appreciate being satirized by a protégé. So in the summer of 1912, Sennett broke away to form his own company, Keystone. But before he did, he directed the June 24 release, "A Dash Through the Clouds."

In this film, Mabel leaves boyfriend Fred Mace to fly with aviator Philip Parmalee, becoming the first actress to perform in – or rather, on – an airplane. A biplane, to be exact; pilot and passenger sat on the lower wing. Airborne close-ups were staged, but we clearly see Mabel is aboard on takeoffs and landings. (It was dangerous work. A week after shooting, Parmalee's plane failed and crashed; he died.) The climax has Mace chased by enraged Mexicans because he flirted with one of their women. Normand and Parmalee fly to the rescue, revolvers blazing from the air, and Mace is saved. By now, the pattern had been set: Onscreen, Mabel Normand takes her place in the world as her own woman, a match for any man, without sacrificing an iota of her vivid, graceful, lovely, tough femininity.

As original as her character was her performance. No mugging. No exaggeration. A personal relationship with the camera. A direct connection with the audience. She was the first great clown of cinema. Those who followed – Roscoe Arbuckle, Charlie Chaplin, Buster Keaton, Harold Lloyd – would begin by mugging for the camera but would quickly catch on and imitate Normand's example. She set the template.

And she knew it. She later said: "I had no one to tell me what to do. I had no precedent, nothing to imitate. I had to do something that nobody had ever done before."

Chaplin, Keaton, and Lloyd created archetypes and performed brilliantly within the confines of those archetypes. Their archetypes were icons, great in their expressive force, but it is just as true that their archetypes protected them as actors. Most comediennes who followed Mabel Normand chose archetypes that suited male constructs: Carole Lombard, Katharine Hepburn, and Lucille Ball were ditsy; Clara Bow, Jean Harlow, and Marilyn Monroe were sexy. Mabel Normand chose a more difficult archetype than the more famous clowns of the screen. Her persona offered no protection. She played a woman, neither plain nor simple, neither ditsy nor overtly sexy. Rather, Mabel Normand played an intelligent, attractive, mischievous, vulnerable, tough-minded character with a lot of heart – a person who was game for whatever dares life threw her way.

Tejana Dames singer Traci Lamar Hancock is battling cancer and needs our help. You can donate at www.traciforgrace.com. Traci and her family thank you.

Letters at 3AM: A Century Since 'The Water Nymph'
On September 23, 1912, Keystone Films released its first comedy, which starred Mabel Normand 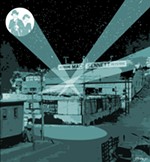 Letters at 3AM: Shindig on Effie Street
The silent film comedians at Keystone Films lived their art