Your Style Avatar made it out on the last night of SXSW, and boy, are his pumpkins squashed 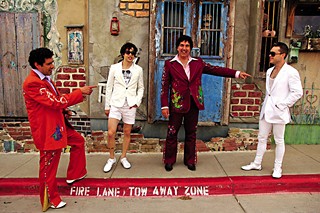 The elegant and stylish Triple Cobra (dressed in white) meets the colorful Krayolas at SXSW. (Photo by Todd V. Wolfson)

I shocked myself on the last night of South by Southwest by walking across Downtown to events. Twice. Thank God for my cane, though I would have been happier in my wheelchair. Stephen Rice drove me to the Omni so I could drop off an overnight bag and say hi to my sister Margaret, and accompanied me on my journey. Then it was off to Style X, which, in its second year, is settling nicely into its skin. The vendors all had merchandise for sale – some meh, some fabulous – to the public. Dandy's: The Gentleman's Store sold wonderful, 1870s- to 1930s-inspired menswear to be worn in a contemporary fashion; Sephora offered makeovers and gave away tubes of the amazing Buxom mascara; Austin's own Helm Handmade offered its gorgeously styled boots once again; Lilly Lorraine couture, also from Austin, presented accessories, jewelry, handbags, and dreamy, ethereal dresses; the Convertible Dress showed a new twist on a single dress that can be worn many different ways; and EZ.Duz.It by Elliott showed clever and amusing wallets and bags, like the Duran Duran one that I snagged. Sierra Bailey's Manic Trout Jewelry, again from Austin, and the Austin Fashion Market founded and sponsored by the divine TexStyles Designer Fabric Showroom were also present. I walked away with a to-die-for bracelet from Austin's own Gay Isber for the Sugar Factory and a shirt from Iced by the Austin Fashion Market. It was a perfect shopping experience.

The panel on families in business was both entertaining and irritating. Sometimes what the panelists said was deeply ingrained wisdom that every designer should have, but sometimes my head wanted to explode when I heard them expound on certain theories. The runway show at the end was ultimately entertaining. Even though we could see the clothes and accessories in the vendors' booths, having them worn by celebrity musicians (like the adorable Schmillion) was a delight. All in all, Style X has a terrific future drawing the big names as well as offering exposure to lesser-knowns. After that, we stopped by Oilcan Harry's to see the end of Chase Martin's Outlander Spring Festival featuring "out" bands from all over the country. While there, we walked over to my friend Andi Scull's party at Ballet Austin, a beautifully designed event with enormous graphics projected on the windows and the walls (put together by my friend Jacki Oh and the Art Department), featuring a sublime concert by Chrysta Bell. Since we were over on that side of town, we picked up our VIP credentials for the Perez Hilton party and entered into the madness. This year was not free, and attendance was low; the labyrinth of cattle guards to guide the hordes went largely unused. By late evening, they were practically giving away wristbands for this year's show. It paled in comparison to previous years when you practically had to trade sex favors for passes. With all due respect, I actually enjoyed this party more than others because of the lower attendance. Even though SXSW was littered with bold-faced names (Bruce Springsteen, Jay-Z, and Eminem, among others), Perez dragged along a few of his own. We watched Dragonette tear up the stage with her irresistible vocals. We watched the hypnotic Kimbra, Timbaland, Cher Lloyd, and Dev, another hypnotic singer. After Perez, Stephen and I walked all the way across town to the Palm Door on Sabine Street. The name has always confused me. Is it supposed to be a play on the Palme d'Or? Or did they think that's the way Palme d'Or is spelled? Regardless, the Style X afterparty was in full swing and we had an enchanting time visiting with Style X Founder Joah Spearman and TexStyle owners Benson Roberts and Markhollan Swientek. By then, my pumps had turned to pumpkins and I was exhausted. Stephen and I made our way back to the Omni and relaxed on the balcony overlooking all the frenetic crowds, glittering lights, and music emanating from every building, parking lot, and street corner. Ah, farewell, SXSW 2012. It was the best ever.