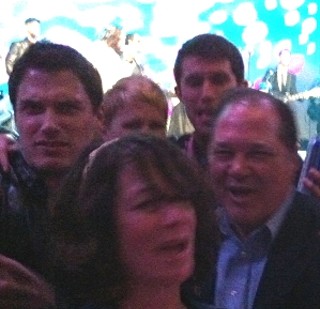 There is a lot of anxiety among the townies about being properly credentialed during South by Southwest, and rightfully so. No one is more obstinate than a semiretired junior high school history teacher getting all Barney Fife in his SXSW Volunteer shirt (which, rumor has it, are treated with a topical solution of testosterone, methamphetamine, and gorilla adrenaline). Word to the wise: Don’t cross those crazy bastards. That said, it seems that the Luvdoc is a natural-born volunteer whisperer, because I breezed through every security phalanx in the past few days like Jesus himself. This magic run started at the Texas Film Hall of Fame Awards last Thursday when, because of a rather intense pregame session that involved a bottle of mezcal and some amyl nitrate, I arrived 30 minutes late for dinner and didn’t have the time or sobriety to check in at will-call. Instead, I blew through security amidst a posse of sharply dressed socialites who had all the proper documents and, most importantly, a sense of entitlement. Turns out that if you have hair like Anderson Cooper and the rheumy-eyed swagger of Foster Brooks, you don’t need credentials at all, just a serviceable sports coat and a rich San Tropez tan (actually the remnants of a wicked sunburn, but really, what’s the dif?). I truly did have a ticket waiting at will-call (extorted, of course), which contributed to my own sense of entitlement. That, along with my full head of gray hair, was like pixie dust to the door people, who brushed me through with pleasant smiles. For the next few hours, I terrorized the SXSW and Chronicle tables with the obnoxious, boorish behavior of the unsoaped underclasses and tagged celebrity coup whenever I could: Robert Rodriguez in the men’s room (does that hat creep anyone else out?). Angie Dickinson passing by in a fedora (again with the hats), Barry “Badass” Corbin at the bar, and the rest of the folks at the Chronicle table, who mysteriously evaporated just as I was hitting my stride: Chronicle writer Margaret Moser, actor Ed Hattaway, Dale Dudley, and the scintillating Bob Fonseca, who is a younger version of the Most Interesting Man in the World. Just before I blacked out, I gave my camera to Tina Harrison, who snapped this fetching photo of Chron Ad Manager Mark Bartel, ad rep Elizabeth Nitz, chick singer Suzee Brooks, SXSW stud Jacob Stetson, and Boneboys star Johnny Walter ignoring Grupo Fantasma’s energetic closing set.