Your working-class Style Avatar gets a whiff of the Boss, et al, and nearly passes out 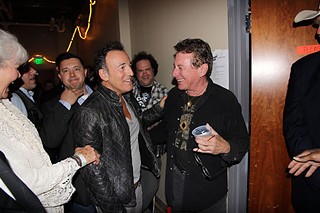 Todd Wolfson caught this magic Austin moment of the Boss with Joe Ely backstage at the Austin Music Awards, and according to Todd, Bruce's handler (left of Springsteen) is neither stroking his chin nor clearing his throat! (by Todd V Wolfson) 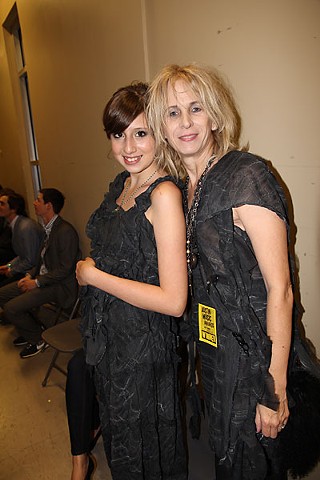 AMAZING AMAs I hastily and distractedly slapped down my coverage of the Austin Music Awards waaaaay after deadline yesterday, so needless to say, it was a tad light. Here's the real review! This 30th anniversary show was faaabulous. So fabulous that 30 years after it all began, Wednesday's awards show was the best AMA show ever. Absolutely flawless. The show's director, my sister Margaret Moser, is still on cloud nine after the success of the show, and she has every reason to be. Her hard work turned this show into a major coup de grâce. Quiet Company (which isn't necessarily so quiet) was wonderful, opening the show with lovely melodies and performances. It also swept the awards winning Band of the Year, Song of the Year, Album of the Year, and Producer of the Year, as well as several other individual awards. I can attest: Joe "King" Carrasco proved that we've been right all along by having fallen in love with his charm and music so many decades ago. Sixteen Deluxe, starring the luminously lovely Carrie Clark, performed its mesmerizing tour de force "Idea," which was not only a trip back in time, but awe-inspiring as well. Carrie's so stylish and gorgeous, not to mention talented, that I want her to be my next fashion goddess. Carolyn Wonderland played with Ruthie Foster, an incredibly fine pairing as they both seemed to inspire each other. The electricity was crackling in the air. Christopher Cross played a reunion set with his band, accompanied by Mother Falcon and conducted by the Austin Symphony Orchestra's Peter Bay. The true magic of the night was Alejandro Escovedo's set at the end. He sang and played beautifully, of course (this is his umpteenth AMA show), and shortly he was joined onstage by surprise guests Joe Ely and Bruce Springsteen. Performing three songs together, Escovedo, Springsteen, and Ely gave an irresistible kickass finale with the Rolling Stones' "Beast of Burden." The crowd worshipped at the musical altar that held such greatness. It was sublime. Even the jaded old queen that I am was blown away. This may have been the biggest highlight of South by Southwest for me so far. I'm so damn proud of my sister, as well as Chronicle Editor Louis Black and Publisher Nick Barbaro for putting together this unforgettable experience.

FURTHER FUN Giving us a SXSW close-up view from fashionable Second Street, adorable Chronicle intern/social media blogger Ayeesha Green has been hanging out on at the Langford Market near the W Hotel. Give yourself a treat and check out her latest video posts on our Chronique blog: austinchronicle.com/chronique.

YOUR AGENDA Fashion fest Style X (pronounced "Style By") is a streamlined and more sophisticated version of its debut last year. Overflowing with vendors, panels, and runway shows, this fabulousness continues tomorrow (Saturday). Plus, it's free and open to the public. You can count on finding me there virtually all day.