Letters at 3AM: The Return of Our Angel

Marilyn Monroe has returned to us recently in various guises 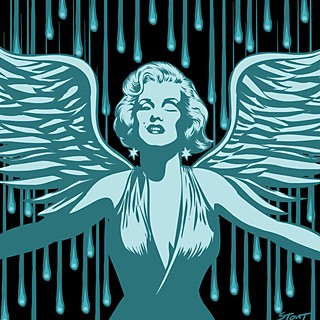 "I don't think I've ever met a writer I'd like as my judge."

Marilyn Monroe said that, and I don't blame her, nor would I dare judge her. But she's returned to us in various guises recently, and, since she's back, a visiting angel, she invites contemplation – as she always did. Best to begin with a contact almost direct.

A friend once delivered groceries in Manhattan. One day, he delivered to an apartment where a disheveled, distracted woman, attempting simple housekeeping, struggled with a vacuum cleaner. She gestured where to put the groceries and tipped him well. Only then did he realize she was Marilyn Monroe. But could it really be her? He asked. Shyly, she admitted, "I'm her – sometimes. Who are you?"

That's how I remember his story. I don't think I've embellished, but after a half-century, I can't be sure. Still, it jibes with written accounts and with what I was told by photographer Sam Shaw, who knew Monroe well. He'd take her to parties and introduce her only as "Marilyn." Inevitably, someone asked her the American question: "What do you do?" She'd say something like "I'm an actress, or I try to be." "Have I seen you in anything?" She'd tell them and they'd be struck dumb, trying to reconcile the shy, pretty, young woman before them with their image of Marilyn Monroe. Yes, this was her. They'd realize once she told them but not until.

Just as often, she'd walk down a street and cause commotions, fully Marilyn – as though that elusive creature was most elusive in herself, sometimes absent when bidden, sometimes present when least wanted. Photographers testified that the woman who stepped into their studios was not Marilyn Monroe; she needed a little time to work herself up into the Marilyn they wanted to shoot.

As for the icon she'd created and embodied, she explained, "I'm close, I can feel it, I can hear it, but it isn't really me."

That icon was created in her own unconscious, so she knew what she was talking about when she said, "I'm always running into people's unconscious."

A creature of the unconscious, she could not help but invoke the unconscious in others. That is what it takes to be a star. One recognizes a mere celebrity. Faced with a true star, one recognizes something in oneself – a process uncontrollable by star and viewer both. They don't call it the unconscious for nothing; in that realm, anything may happen.

She knew this. Her favorite poem was C.F. MacIntyre's translation of Rainer Maria Rilke's first Duino Elegy. Early in the poem, we read, as she did: "For beauty is nothing/but the beginning of terror we can just barely endure/... Every angel is terrible."

She knew everything there is to know about a beauty that is the beginning of terror. She knew, too, that she was a kind of angel to others, and perhaps the poem comforted her with the knowledge that as a kind of angel, she could not help but be a kind of terror – to herself and often enough to others.

Turn the page of Rilke's poem: "All this was assignment. But could you handle it?"

Reading that, would she fling the book across the room only to pick it up and read on? "(Where do you think you can hide her,/what with those great strange thoughts running in and out/of you and often staying for the night?)"

To the Norma Jean who'd become Marilyn, the "her" in that verse was sometimes Marilyn, sometimes Norma Jean, and sometimes selves she had not named. "I'm so many people." It is difficult to conceive the intensity of her uncertainty. Yet hear her be certain when she says, "I was never kept. I always kept myself," and "If I'd observed all the rules, I'd never have got anywhere," and "You've got to get the most out of the moment. Let's make some mischief." To be certain and uncertain at the same time, all the time, was the hell of Marilyn Monroe. Every angel is terrible.

She's returned to us recently, in various guises, and I cannot guess what that portends for 2012, a half-century after her death.

Most vividly, she's returned through Michelle Williams' Academy Award-nominated performance in My Week With Marilyn. Steve Erickson wrote of Williams in an email, "She doesn't DO Marilyn, she takes some of Marilyn's psychic DNA and creates her own Marilyn."

Hollywood's Marilyn is in Williams' portrayal, and even more so, the Marilyn that the best photographers of her time loved as a subject. That was the Marilyn who said, "I can make my face do anything." Every flicker of expression shows a different aspect of her soul; for the still camera, she could be all the people she was afraid of being.

"Deathless Aphrodite of the spangled mind" reads Anne Carson's translation of the ancient Greek poet Sappho. Look at Marilyn Monroe in her photo sessions or look at Michelle Williams' performance and you see the spangled mind and the Aphrodite power that Monroe could never quite convey in her confined motion-picture roles. Williams can do it because, with her great gift, she's playing not a confection but Monroe herself – the American equivalent of playing Hamlet.

Then, surprisingly, the visitation of Marilyn Monroe continues on Monday nights in NBC's series Smash, about the staging of a Broadway musical titled Marilyn. Two actresses vie for the lead: Katharine McPhee as Karen and Megan Hilty as Ivy. Ivy is sexy, gifted, desperate, and scared. Karen is somewhat more gifted, and her supposed innocence masks an abyss of ambition. (Never underestimate the steel of Monroe's drive.) McPhee and Hilty between them can't do what Michelle Williams does, but they're very good. Fifty years after her death, Marilyn Monroe has a TV series. Who else could have done that?

This sounds very like her: "Never mind the bad things in your life. Look back and belly laugh tomorrow with your feet on the air and your head on the ground. I make music out of the voices in my mind, and absolutely everyone can come inside. Who am I? Call me crazy, psycho, batshit, whackjob, insane. ... I'm just that girl who's dying, and I swear I will love you always."

Storm Large wrote that for the sleeve of her album Crazy Enough. And wouldn't Marilyn Monroe have loved to belt out Large's rockin' refrain, "What the fuck is ladylike?"

Visiting us now when we so badly need an angel, she may be surprised to find that Marilyn Monroe remains America's only angel. Not because her stardom transcends every other star's, but because more than any of our many icons, she is us – the "us" that is America: angelic and possessed of demons; brilliant and falling apart; always more a symbol than a reality; yearning for greatness and suicidal; articulate and incoherent; secretive, even while displaying herself naked; made of so many marvelous bits and pieces but never whole; wildly successful and inevitably tragic; voraciously ambitious and hopelessly confused; more famous than all before her and all who will follow but never certain of who or what she was; always trying to be Marilyn Monroe, as America has always tried to be America – and, like America, failing her image of herself. Nothing could be more American than Marilyn Monroe – clear but vague, angelic but desperate – when she said in that whispery voice, "Anything's possible – almost."

Texana Dames singer Traci Lamar Hancock is battling cancer and needs our help. You may contribute at www.traciforgrace.com; Traci and her family thank you. 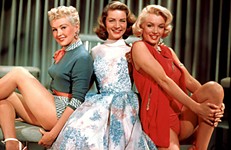