Oh, the wheels are turning toward a very gay South By … 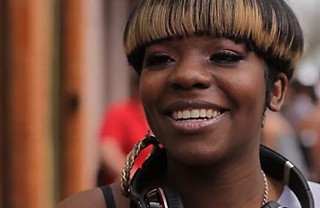 Dear Rye Rye (who is coming to Austin for SXSW): If you ever wanted a unicorn for a zusband, grrrrl, nows your chance.

Tips! Yeah, your great tips for surviving South by Southwest! The Gay Place will be producing some South by So Gay crib notes for the queers coming in from out of town. Email your event in to us now (gayplace@austinchronice.com)! And keep watching this space: Your friendly neighborhood Gay Place and Dandy Unicorn and friends will be throwing two free parties during the Film and Interactive weekend, Saturday and Sunday, March 10-11. We are also hosting the official SXSW Interactive LGBT Meet Up for badgeholders, but the afterparty that evening and the party the next night require no creds.

LIZZY CAROLOKE C'mon. You know you love to sing. Sure, it's usually while naked, in the shower (or outside your ex-boyfriend's window, late on a lonely Friday after stalking his usual haunts and came up with bupkiss). But, hey, we know you have the voice of a soul crooner. Plus, where else can you sing the theme to The OC? Fridays, 8pm-12mid. Bernadette's, 2039 Airport. Free.

FU*KME FU*KME FRIDAYS Who you know and who you blow come together on the dance flo. Every second and fourth Friday, 10pm. The Eastern, 1511-B E. Sixth. Free.

KARAOKE WITH KRAMER Croon with the Krame, or whatever nickname you want to call him. Wednesdays, 9:30pm. Iron Bear, 121 W. Eighth. Free.

AUSTIN GAY BASKETBALL LEAGUE Nothin' but net, baby! Internet, that is. The AGBL's website will keep you in the loop, or in the hoop, as it were. Whoosh! Check out the current season and info on afterparty socials after Thursday's games. Thursdays, 7pm and 8pm games. Austin Sports Center, 425 Woodward. info@atxgbl.com, www.atxgbl.com.

LIPSCHTICK SEEKS SCHTICKERS We've often fantasized about how a band of performative queerballs would play in the Poconos. We think we might be onto something with this one. The recently relocated (to Austin) Lipschtick Collective wants you, you hammy little freak, you. Do it. Your bubby would be proud. 363-5566. lipschtickcollective@gmail.com.

SXSOGAY Nah, that's not the name of an actual fest, but the fest that's coming promises to actually be that gay. So much great stuff. Stay tuned and we'll tell you all about it. Send us your events ASAP and we'll get them on the list! March 9-18. All across town, 512/454-5766. Free. gayplace@austinchronicle.com, www.austinchronicle.com/gay.

VIVA: ONCE UPON A TIME Benefit the Capital AIDS Legal Project at AIDS Services of Austin at this brand new twist on what used to be ASA's Viva Las Vegas. Details soon! Sat., March 3, 8pm. Austin Music Hall, 208 Nueces, 263-4146. www.asaustin.org.