Truman and Michael sittin' in a tree … 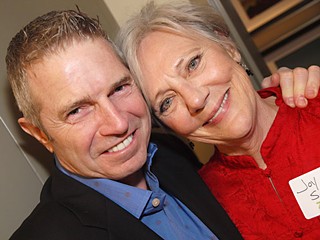 I just couldn't bring myself to attend the memorial for someone I really loved, Charles Gentry. His death, so unexpected, was truly devastating, but as you can tell from my last column, I've been visiting dark places. So forgive me, Charles, you know my heart is with you.

Don't you think it's funny that Gov. Rick Perry has returned to Austin with his tail between his legs? It is evident that his campaign to be a presidential nominee was a mistake from the start. He simply couldn't open his mouth without saying something idiotic and embarrassing to all Texans. (His approval rating in Texas is waaaaay down there.) One of his gaffes was not knowing (or pretending to not know) anything about the 1998 Lawrence v. Texas case. C'mon, Rick, you remember, don't you? It had to do with two gentlemen having consensual sex in a private home in Houston who were interrupted by the Houston Police Department ... and then arrested for sodomy. The case brought about a Supreme Court ruling, a landmark change in gay rights in Texas and across the country – something I'm sure Perry would like to forget. Now a book called Flagrant Conduct by Dale Carpenter reveals the details of the case and reexamines the motives and maneuverings of everyone from the arresting officers and the gay rights attorneys to the justices of the Supreme Court. The book is riveting and reads like a detective novel, but it's all too real and is the first complete coverage of the case.

My third stint as a judge for the Austin Children's Shelter's New Wave Ball Eightes dance party is right around the corner. It happens Friday, Feb. 24, 8pm-12mid (with an afterparty until 2am), at Speakeasy on Congress. Tickets are $20 for general admission and $100 for VIP, which includes an open bar and other privileges. It's always a fun party and always fun to see everybody's definitions of an Eighties look, especially from those who were born in the Eighties ... or even worse, the Nineties! So pull out the banana clips, the elf boots, crazy hair, torn sweatshirts, and garish colors for a riot of amusement. ACS lists complete information on its website: www.austinchildrenshelter.org.

JINGLING ALL THE WAY

This must have been Jingle Ball No. 465, but in reality, it's only the 12th time I've attended the annual ball. It's a private party, with 20 hosts inviting 10 guests each for a total of 200 people, which is the capacity of Saengerrunde Hall. It's just a postholiday soiree where everyone dresses to kill and dances to the sounds of the fabulous Nash Hernandez Orchestra. My date was Jacki Oh, one of my top two fashion icons in Austin. The day of the ball was above 70 degrees – it was still coolish – so I dared to wear my Cruella de Vil fur one more time, feeling sure now that everybody has seen it. Underneath, I wore all black with silver accessories. I wore my black, wide-brim fedora and silver aviator sunglasses, realizing that I had achieved one of Truman Capote's looks without even thinking about it. I wore my black lace shirt (black lace over nude seemed to be the trend of the evening), topped with my black-velvet damask 18th century-style coat, and wore dozens of chains and silver-sequined gloves. If Capote had a child with Michael Jackson (with a hint of Lagerfeld thrown in), they would have dressed the child exactly like I was dressed. We had a good laugh over that, and an even bigger laugh when my old friend, attorney Nathaniel Chapin, (whom I think is the best-dressed man in town) came up to us and said, "You look like a cross between Truman Capote and Michael Jackson with a touch of Lagerfeld." Now there's a man who is fashion-conscious. Thank you, Margaret Shaw, for inviting me again and again.