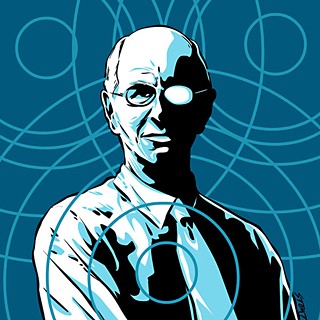 Santa Barbara is a city on the California coast that teeters over the sea and will one day be submerged. What makes California California is that one lives in cities that know they are destined to die – a James Hillmanesque thought if ever there was one.

I'd ducked out of a conference in Santa Barbara to quaff a beer at a nearby bar. In walked Hillman. Never had I expected Hillman, with all his exquisite erudition, to step into a bar in the middle of the afternoon. Without a hello or a nod, he sat on the stool next to mine.

We had each spoken at the conference and had met before, but not one-on-one. I'd read lots of his stuff; he'd read a little of mine. He ordered his drink. I lit a cigarette. (You could still do that in a bar in the Eighties, even in California.) I waited for him to speak because I didn't know what to say to a man who could write that incredible book, The Dream and the Underworld, and conceive its central sentence: "Soul is made in the rout of the world."

"You and I," he finally said, "are very different, but we have the same enemy: monotheism."

I knew what he meant, and he knew I knew. He'd attacked monotheism using his exhaustive knowledge of the gods of ancient Greece; I'd attacked it from my study of vodun (commonly called voodoo).

In general terms, he meant this: Monotheism posits an all-knowing, all-powerful, all-good god. So how does monotheism account for what it calls "evil"? An all-powerful capital-G God who is good cannot be responsible for evil, so evil must arise from a counterforce, a Satan who is God's enemy, or from human beings infected by Satan. God's hands stay clean. This construct sets up an either-or world of opposites and views life through a dynamic of opposites: us vs. them.

Polytheism is labyrinthine. Zeus or Damballah, Aphrodite or Erzulie may do you good on one day and do you harm the next. Opposites blend in the same iconic figure, in the same force, in the same instant. In the polytheist and pantheist constructs, every force contains and will sooner or later exhibit its opposite.

Monotheism is an either-or, us-vs.-them trap. Polytheism is a this 'n' that, here 'n' there moment.

That was our common intellectual ground. On that ground, our friendship began.

Flash forward a few years. LA Weekly Editor Kit Rachlis asked his star writers to list the most important thinkers of our time. First on my list was James Hillman. No one else at LA Weekly knew the name. Rachlis said: "Ventura, write a cover story on Hillman. Tell us what he's about."

I would not dare generalize Hillman's densely conceptual, beautifully written works – The Dream and the Underworld, Re-Visioning Psychology, Suicide and the Soul, and The Myth of Analysis (to name just a few). The only way was to let Hillman speak for himself. I did the interview, and on July 1, 1990, LA Weekly ran his photo on the cover with this headline: "We've Had a Hundred Years of Psychotherapy – and the World's Getting Worse."

That issue was a hit – one of the Weekly's most discussed, controversial stories. The interview began with this:

James Hillman: "We've had a hundred years of analysis, and people are getting more and more sensitive, and the world is getting worse and worse. Maybe it's time to look at that. We still locate the psyche inside the skin. You go inside to locate the psyche, you examine your feelings and your dreams, they belong to you. Or it's interrrelations, interpsyche, between your psyche and mine. That's been extended a little bit into family systems and office groups – but the psyche, the soul, is still only within and between people. We're working on our relationships constantly, and our feelings and reflections, but look what's left out of that.

"What's left out is a deteriorating world.

"So why hasn't therapy noticed that? Because psychotherapy is only working on that 'inside' soul. By removing the soul from the world and not recognizing that the soul is also in the world, psychotherapy can't do its job anymore. The buildings are sick, the institutions are sick, the banking system's sick, the schools, the streets – the sickness is out there. ... The world has become toxic. ... There is a decline in political sense. No sensitivity to the real issues. Why are the intelligent people – at least among the white middle class – so passive now? Why? Because the sensitive, intelligent people are in therapy! They've been in therapy in the United States for thirty, forty years, and during that time there's been a tremendous political decline in this country. ... Every time we try to deal with our outrage ... by going to therapy with our rage and fear, we're depriving the political world of something. And therapy, in its crazy way, by emphasizing the inner soul and ignoring the outer soul, supports the decline of the actual world."

Hillman's thought covers a far greater range, but that was what he was thinking about at the time of our interview. It was such a hot topic it became a book, still in print: We've Had a Hundred Years of Psychotherapy and the World's Getting Worse (1992). Technically, I co-authored the book, but only technically. We had many conversations, he and I, and recorded them. I edited the recordings into a book, but he was its force and fountain.

He died this past October. I don't know how to convey such a man. What do you say about an intellectual genius who learned to tap dance in his 60s? He fixed his attention upon you with piercing eyes that were severe yet kindly. His knowledge was vast, his laughter infectious, his integrity absolute. Passionate thought, thoughtful passion – these concepts he embodied.

Will psychology produce another thinker of his stature? Since American therapists succumbed to so-called "managed care," no such figure has appeared. The geniuses of psychology – Sigmund Freud, Carl Jung, Wilhelm Reich, R.D. Laing, Hillman – are not the kind who can be managed.

In David Cronenberg's film A Dangerous Method, Viggo Mortensen's Freud says to Michael Fassbender's Jung, "I assure you, in a hundred years' time, our work will still be rejected." That, in fact, has happened in the field that still calls itself psychotherapy but concerns itself not with the psyche but with coping techniques. Coping has its virtues, but is it even half enough? Freud, Jung, Laing, and Hillman would agree that teaching people to cope with a crazy world roots them more firmly in craziness, whereas a psychotherapy that includes psychology – a study of the psyche – attempts to bring forth and strengthen a person's wholeness.

It is no wonder that in his later years, Hillman turned his back on a field that now shies away from the depths of what we are.

Weeks before he died, Hillman dictated to his wife, Margot McLean, these words for his friends: "We are following a middle road, neither upbeat nor downbeat. And I am more and more convinced that upbeat tends to constellate its counter, so before wishing for recovery in the old sense, one should think twice. It's what's going on now and not what the imagination conjures regarding a so-called future. I am dying yet in fact, I could not be more engaged in living. One thing I'm learning is how impossible it is to lay out a border between so-called 'living' and 'dying'."

That was the man.