Cuddle up with Stephen for some holiday cheer 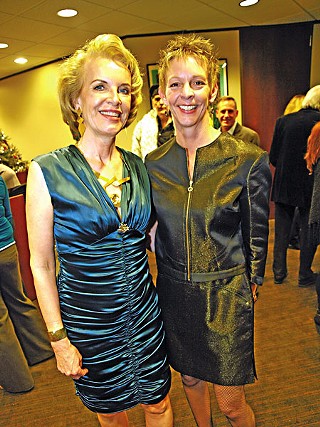 Of the few parties I attended, attorney Becky Beaver's (l) was a smashing success. Here is Becky along with Martha Oestreich, board chair of Equality Texas. (Photo by Seabrook Jones/www.juicythis.com)

I haven't done anything that I want to write about except continuing to recuperate from my recent surgeries. I wish I could say that I was recovering from complete body sculpting and a face-lift, but you know better than that. I have, however, become alarmingly slim from weeks of no appetite, but I don't really mind that part. I've certainly been painfully obese in my time, so being really skinny is fun. I just wish it wasn't related to being ill. I even have to use those electric shopping carts at Walmart most of the time. When I was obese, I was simply too embarrassed to use them, knowing that everyone at Walmart would know I was using it just because I was fat (of course, everyone's fat at Walmart). It's like seeing someone parking in a handicapped spot and trying to see whether they look disabled. It makes me realize, of course, that not all disabilities are visible. Now I'm the terror of Walmart, zipping through the store as fast as the little cart can carry my bony ass. The aisle that runs from the nursery to the deli is the length of Rhode Island, so getting around expeditiously is very important. The carts make me feel like I'm on the kiddie cars at the carnival. Sometimes it's more like bumper cars as I careen around the corner from the frozen foods to the pharmacy, nearly clipping two shopping baskets and several unattended children while hurling frozen pot-pies and Q-tips into my cart. I just wish the carts had a horn to alert shoppers to watch out for me; I have no fear of driving backward down an entire aisle if the cart relentlessly beeps with a sound that makes you want to duck and cover. But finding that I could no longer make it all the way through Walmart anymore was sobering. Being ill is terrible. Hurting all the time has the terrible effect of making a person incredibly self-centered. It's so hard to see past the discomfort that absorbs all emotional energy that there is no one else but you ... and the pain. It's regressing to a stage where no one else matters, and you're helpless and without any control of it. Most of the time, I don't want to talk to my friends who are just checking in because I have nothing to say. I isolate myself in my room watching movies and sleeping. I stand in front of the refrigerator rubbing my scrawny chest and wishing something appealed to me. I lay in bed feeling sorry for myself and not knowing why. I have missed virtually every holiday party I was invited to simply because I didn't have the energy to pull myself together. I suspect that since I can no longer produce testosterone, I must be going through what is called manopause. I certainly feel hormonal, with lots of crying and irritability one minute and sunshine and roses the next. Most men are extremely uncomfortable discussing this matter, but virtually every woman I've discussed my health issues with has laughed sympathetically and said, "Now you know what we go through." My illness is apparently so severe that it made me watch Miley Cyrus' movie The Last Song. Well, it'll certainly be her last movie, anyway. Her repellent character reminded me in a weird way of Elizabeth Berkley as Nomi Malone in Showgirls. The only reaction I could summon was wanting to slap her ... and her costume designer. The plot about her living with her cancer- ridden father should have hit home with me, but Mlle. Cyrus is such a dreadful actress that if I were her father, I'd send her packing. I also watched Boys on the Side with Drew Barrymore and shamelessly wept copious tears. Pure schlock, but totally watchable. The whole illness plotline was very sensitively handled. My DVR is my BFF these days. I've watched so many movies that I couldn't even tell you their names. I seem to forget a lot lately, distracted as I am. But what I never forget is how grateful I am to Austin Chronicle Editor Louis Black and Publisher Nick Barbaro. Having this job for more than 12 years has been the highlight of my life. Thank you, Louis and Nick. And to my longtime editor Kate Messer, you make it happen. But most importantly, thanks to you, my readers. Even those who hate me. It's the holidays, dammit. Let the cheer begin!