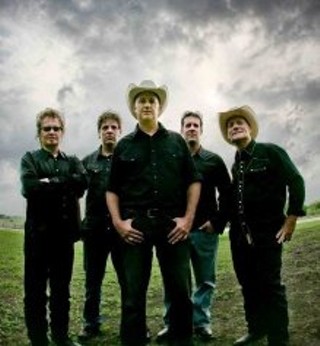 If you're too cool to dance country, you're living in the wrong burg. Pull that stick out and relax, Slick. If you're that uptight, nobody thinks you're cool anyway, so you might as well access your inner dork. Yes, Austin may have bottle service, guest lists, and douchey dudes with gelled faux-hawks and tattoos on their shirts, but thank fucking God we're still in Texas. It's truly our ace in the hole. Being smack dab in the middle of Texas has its disadvantages, sure, but it keeps our pretentiousness in check. There are still small pockets of authenticity in Austin, even if the authenticity is sometimes so overhyped it makes them seem artificial. The Broken Spoke is one of those pockets. Yes, it's been called "The Best Honky-Tonk in Texas," "The Best Country Dance Hall in the Nation," and a "must-see place when visiting Texas," which might lead you to believe that Roy Spence is personally handling the Spoke's publicity, but he's not. Actually the wizard behind the curtain is none other than owner James White, who, along with his wife, Annetta, has been running the show at the Spoke since the couple built it back in 1964. That's not a typo; it's a miracle. Anyone who has dipped a toe in the club business for more than a few weeks knows that it takes a superhuman amount of compassion, love, and patience – the type of God-like qualities that club owners often seek in the bottom of a whiskey bottle or a vial of cocaine. Selling booze certainly invites a hornet's nest of associated troubles, but it's a rare breed that has the fortitude and management skills to deal with musicians on a daily basis, much less for 47 years. Imagine if instead of pushing a boulder up a hill, Sisyphus had to herd cats – alcoholic, meth-snorting, pill-popping cats with women problems and car problems and drummer problems and ego problems. In comparison, pushing a rock for eternity is like Zen meditation. To their credit, James and Annetta are Zen enough to keep it simple. They book country dance bands – good ones too. Over the years they've had some true legends grace the stage: Bob Wills, Ernest Tubbs, Roy Acuff, Hank Thompson, Tex Ritter, Ray Price, Kitty Wells, Kris Kristofferson, George Strait, and, of course, Willie Nelson. But the Spoke isn't beloved because it's a great place for star-watching; it's beloved because it's a great place for dancing. Five nights a week, Tuesday through Saturday, the dance floor at the Spoke is generally hopping with all types of dancers: wide-eyed European tourists, adventurous hipsters, starched Wrangler-wearing urban cowboys, blue-collar rednecks, even blue-haired septuagenarians who still like to cut a rug. The skill levels are diverse too, so if you're not a John Travolta (Bud not Tony), you won't feel out of place. If you're polite about it, you can generally find someone to take at least a few spins around the floor. And if you don't know how to country dance or you're convinced you just suck at it, show up at 8pm and James and Annetta's daughter Terri will show you how it's done … at least enough to give you some training wheels. If you're still feeling skeptical, carve this Wednesday night out of your schedule and spend it at the Spoke. Get there early, and eat a chicken-fried steak dinner while listening to happy hour regular TJ Bonta. Afterward, head into the big room for dance lessons at 8pm with Terri, so you'll be ready to roll when Jeff Hughes & Chaparral hit the stage at 9:30pm. Jeff Hughes and his band Chaparral have been country dance favorites in Austin for more than 20 years – and with good reason. They know how to keep the dance floor hopping with a set list that's as diverse as the city itself: great originals mixed in with cover songs that range from George Jones to Guns & Roses and Conway Twitty to the Cure … yes, that Cure. You'd be surprised at how some songs sound even better with just a little country twang. The same is true of people. Maybe you're one.