Letters at 3AM: Occupy the Future

Corporations are not people 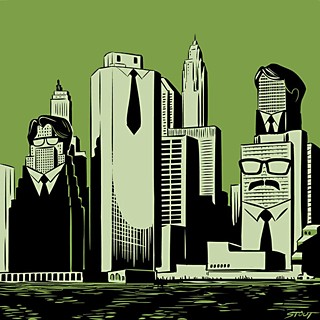 "I'll believe corporations are people when Texas executes one."

The person who created that sign in Zuccotti Park put her or his anonymous finger on the heartbeat of the Occupy movement.

Many wonder what Occupy stands for and why Occupy has not made specific demands – as though it's not enough that, in Occupy's brief existence, its participants have emblazoned the difference between the 1% and the 99% upon the consciousness of America. As my longtime colleague Ginger Varney said, "They've changed the conversation."

In his recent speech about the economy, the president referenced the 1% and 99% disparity because he had to; for now, no one can credibly discuss economics without mentioning the 1% and the 99%. Occupy has, indeed, changed the conversation – an achievement that cannot be overestimated.

It is not my place to speak for Occupy, but I'll use my own "people's mic" to offer a proposal: that Occupy demands a constitutional amendment to reverse Supreme Court decisions that have given corporations the rights of citizens. Carefully craft this amendment to make clear, beyond doubt, that a corporation does not enjoy or deserve the constitutional rights of a citizen. Rather, a for-profit corporation is a commercial venture subject to the republic's laws governing commerce. This amendment must state and enforce that corporations are not people.

Change the Supreme Court's stance that corporations are people and you change the fundamental rule under cover of which corporations conduct themselves. The passage of such an amendment would go a very long way toward getting corporate money out of American politics.

That would be a revolution. It would change the electoral playing field.

In the election year of 2012, anyone running for any office should be made to take a stand on this amendment and answer this question: Do you believe a corporation should have the rights of an individual citizen – yes or no?

The answer to that direct and simple (but not simplistic) question would indicate which side an office seeker is on, the 1% or the 99%.

Thus the 2012 election would not be about Democrats, Republicans, independents, tea partiers, or Occupy. Instead, the election would be about one central, crucial issue: Do you serve the 1% or the 99%?

You can't call it a "class war" when the class you defend is 99% of the population.

Make the "corporations are not people" amendment central to the election and you begin the nonviolent, constitutional revolution in commerce that we desperately need.

Economic conservatives – servants of the 1% – claim that all challenges to their conception of capitalism are European in origin, a not-so-subtle way of calling challenges to corporate capitalism un-American.

Those conservatives need a history lesson.

Robert L. Heilbroner, in his classic economics study The Worldly Philosophers (Revised Seventh Edition), reminds us that in Boston in 1639 – just nine years after Puritans founded the city – "one Robert Keayne ... [was] charged with a heinous crime: he [had] made over sixpence profit on the shilling, an outrageous gain. The court [debated] whether to excommunicate him for his sin, but ... it finally [relented] and [dismissed] him with a fine of two hundred pounds," an enormous sum in that time and place. Keayne was so contrite that "before the elders of the Church" he "with tears [acknowledged] his covetous and corrupt heart." The first Anglo-Americans considered undue profit "covetous and corrupt."

That wasn't the end of it. The minister of Boston used Keayne's offense to "thunder forth in his Sunday sermon on some false principles of trade." In the minister's words, the most heinous and false principle of trade was this:

"That a man might sell as dear as he can, and buy as cheap as he can."

Heilbroner: "Even to our Pilgrim forefathers, the idea that [commercial] gain might be a tolerable – even a useful – goal in life would have appeared as nothing short of a doctrine of the devil."

The ideals of Occupy are as American as the Pilgrims.

Fast-forward to Dec. 3, 1861. Abraham Lincoln, the greatest Republican president, included these words in his Annual Message to Congress (excerpted from Abraham Lincoln: Speeches and Writings, 1859-1865):

"[T]here is one point ... to which I ask a brief attention. It is the effort to place capital on an equal footing with, if not above, labor [Lincoln's italics] in the structure of government. It is assumed that labor is available only in connection with capital; that nobody labors unless somebody else, owning capital, somehow by the use of it, induces him to labor. ... Now, there is no such relation between capital and labor as assumed; nor is there any such thing as a free man being fixed for life in the condition of a hired laborer. Both these assumptions are false, and all inferences from them are groundless. Labor is prior to, and independent of, capital. Capital is only the fruit of labor, and could never have existed if labor had not first existed. Labor is the superior of capital, and deserves much the higher consideration. Capital has its rights, which are as worthy of protection as any other rights. Nor is it denied that there is, and probably always will be, a relation between labor and capital, producing mutual benefits. ... This is the just, and generous, and prosperous system, which opens the way to all – gives hope to all, and consequent energy, and progress, and improvement of condition to all. No men living are more worthy to be trusted than those who toil up from poverty – none less inclined to take, or touch, aught which they have not honestly earned. Let them beware of surrendering a political power which they already possess, and which, if surrendered, will surely be used to close the door of advancement against such as they, and to fix new disabilities and burdens upon them, till all of liberty shall be lost."

Occupy's ideals are as American as Abraham Lincoln.

When the Supreme Court bases decisions on the precedent that corporations have the rights of people, it does what Lincoln feared: It fixes new disabilities and burdens upon us, "till all of liberty shall be lost."

We can change this. It's been done before.

Until 1920, American women were denied the vote. The 19th Amendment changed that.

Until 1964, Southern states enforced segregation by tactics such as poll taxes. The 24th Amendment made those tactics illegal.

Through an amendment to the Constitution, we can change the legal status of corporations. We can do it now.

Mayer Vishner, a lifelong activist, has witnessed Occupy Wall Street up close since the first day. He tells me, "Occupy is not an event, it's not a movement, and it's not a protest. It's a consciousness shift."

America was created by a shift in consciousness, as recalled by John Adams in an 1815 letter to Thomas Jefferson: "What do we mean by the Revolution? The war? That was no part of the Revolution; it was only an effect and consequence of it. The Revolution was in the minds of the people, and this was effected from 1760 to 1775, in the course of fifteen years before a drop of blood was shed at Lexington."

Occupy is as American as Adams and Jefferson. Occupy marks a shift in consciousness that can lead to a new and freer world. Occupy is not about this or that plot of ground. The mission of Occupy is to occupy the future.