Investment, invention, and labor: the three pillars of commerce 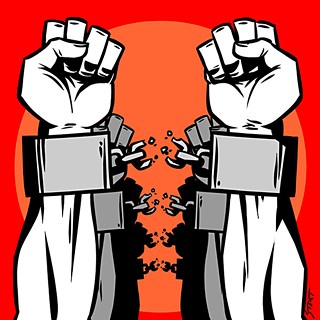 My draft of a workers' manifesto:

Labor is essential to your enterprises, but labor is paid the least and granted few, if any, rights. In your so-called free market, workers have few, if any, alternatives; most have to accept that the game is fixed and go to work regardless. That is oppression. That is theft. Yet if we were to call you thieves, you would be mightily offended, and rightly so. Most of you are honest, by your lights, and hardworking. You participate in theft, yet you are not criminals. Rather, you passively accepted participation in a massive crime – a criminal activity sanctioned and enthusiastically promoted by every authority you've trusted. You didn't want to see that, and you don't want to change, not because you're evil, but because you're comfortable – and you're afraid. It must be admitted that we don't care how nice you are or what good works you do; your equity is based on stealing the fruits of our labor; your affluence costs too much. We do not say you're bad. We do say that you failed to think things through and that this failure to look clearly at how your money is actually produced has consequences. But we do not wish the terror of those consequences to overwhelm you. That is why it is important for you to think now. We wish you no harm. We have no desire to burn your houses or rob your safes. But the economic terror and theft that you've participated in ends now. We do not demand all the power, only the power that is ours by right. Investment, invention, and labor – these are the three essentials of commerce. Justice, and the stability that justice generates, requires that these three elements benefit equally.

It is crucial to dispense with the term "unskilled labor." That term is a device to divide the work force against itself. Labor must be valued according to its necessity, not its skill. If fruit pickers, busboys, cashiers, or receptionists are essential to an enterprise, then they are essential, and that's that. Their essentialness, not their skills, must determine their value. They merit a third of the profits and a third of the say.

Yes, everyone will have to learn a lot and must learn it as they go, and many mistakes will be painfully made and painfully corrected; it will take years to work out protocols that are mutually understood, but that is a small price to pay for justice.

Yes, unforeseen difficulties and unintended consequences will sprout everywhere while we learn to apply a value other than money to human beings and to life itself. But to say it cannot be done is to deny the incredible variety of all we have already done in the ongoing experiment that is the human journey.

Let's consider a small business. In a restaurant, say, the employer is often a primary laborer, an inventor (inventing the concept, the menu), and an investor. In a fair system, that employer would retain a large measure of profit and authority, because he or she would participate in the laborer's, the inventor's, and the investor's share. But other employees would be paid according to the necessity of their labor and merit a share of the profits and a one-third vote in decisions that affect the entire enterprise. Investors, too, would share in no more than one-third of the profit and decision power.

Using this model, a larger business would be run like a republic. A work force of 10,000, say, would elect representatives who would form one-third of the board of directors; the work force would share one-third of the profits (over and above wages, which are an operating expense), while the remaining two-thirds of boardroom votes would be divided among investors and inventors. All essential elements would be represented equally.

It gets trickier in an enterprise like a school. Maintenance crews, teachers, and administrators are the school's laborers. Yet teachers are also inventors, composing lesson plans and upholding standards of learning. Maintenance is an essential function, but a janitor should not make education decisions – that's common sense. However, in decisions that affect the future of the enterprise that is the school, maintenance deserves a seat at the table.

It's not about every person voting on every decision. It's about each contributor – labor, investor, and inventor – having equal equity and equal say. It's not a consensus. It's a republic. Conflict and good old-fashioned horse-trading are givens. It's messier than militaristic, top-down hierarchy, but it affords the possibility of justice and liberty.

Some people, and some enterprises, will be richer than others because some are more creative, some are smarter, some are luckier, and some work harder. But everyone will have a stake and a say. And, most importantly, no one will steal anyone else's labor. For labor is time. And time is life. No amount of investment confers the right to steal life.

This will be truly free enterprise: each enterprise competing in a truly free market. Private property respected. Private liberty protected. Nobody owning anybody else. Nobody with arbitrary power over anybody else. Everybody taking their chances in a fluid system that depends, ultimately, on every individual effort (and, of course, the vicissitudes of Providence). The ideal of the present system – that those with the best ideas and those who work the hardest reap the most rewards – will be retained. What will be added is a just return for the investment of one's time. For "time" is only another word for "life."

We see a world in which a worker in any business – large or small, manufacturing, agriculture, or service – gets a piece of the action. A fair piece because labor is valued equally with invention and investment, and no element is potent without the others. We see a workplace where workers are integral to the decision-making process of all company policies. Where we don't just have "input," we have power. A world with no fetters on expression, organization, or nonviolent action. We see a world in which businesses that affect an entire community (utilities, communications) or affect the environment must have major decisions ratified by the community affected. We see a world where, under these conditions, businesses compete freely with no centralized control.

Yes, there will be inequalities. That's life. But they will be inequalities of talent and luck, not inequalities of opportunity and authority. Yes, there will be conflict. That's life, too. But it will be conflict among people with equal access, equal voice. We see a world where "free enterprise" doesn't mean freedom to be ruthless but freedom to go as far as creativity and courage allow – a freedom limited only by its constant give-and-take with the freedoms of others. A world of cooperation and conflict but not domination, where no one is silenced by the fear of losing his or her livelihood.

We cannot achieve a better world without aspiring to the best of worlds.

A longer version of this essay will appear in Six Memes for the New Millennium (ZgPress, January 2012), edited by Rosetta Brooks. My thanks to Rosetta for allowing this essay, written last July at her request, to debut in the Chronicle.