It is only a matter of time before an interconnected world work force begins to ask, 'Who are we really working for?' Subtitle: "The Worldwide End of Capitalism and Its Replacement by a Mode of Commerce for Which, as Yet, There Is No Ism."

If I were to tell you that we will soon reach a moment in history when the workers of the world actually can unite, take down capitalism, and begin the evolution of modes of commerce that are free and fair – well, even if you were sympathetic toward me, the best response I could expect might be:

Chinese students, who had no definite program, demonstrated for days in Beijing's Tiananmen Square – a peaceful, patriotic protest. The students wanted no revolution, only liberty. The government controlled all media within China, so this movement did not spread. Peasant troops from the borders, transported to Beijing by rail, were ordered to stop the "counter-revolutionaries"; they mowed the urban children down.

The world was amazed by the students but not by their fates. In retrospect, it seemed inevitable.

What happened later that year was unlikely. Very.

The world had seen how totalitarians dealt with peaceful demonstrators. So what possessed the peoples of East Germany, Poland, Czechoslovakia, Romania – the entire former Soviet bloc, in fact – to do the very same thing Chinese students had done in Tiananmen Square?

No one saw it coming. These peoples had suffered subjugation for decades. Whatever their private dreams, they'd indicated no capacity to risk everything in nonviolent rebellion. Yet, in the greatest abracadabra of modern times, suddenly the Soviet bloc and the Soviet Union were no more.

What made this possible in 1989? Theories abound. We can be certain only of the result: a changed world, changed by common people who just a year before in 1988 never dreamed they would or could do what they did.

Twenty-one years later, beginning Dec. 18, 2010, Tunisians did the same, surprising the world as much as they surprised themselves. At first, talking heads and op-ed writers opined that Tunisia was unique, almost Western, hence this rebellion would not spread. Nonviolent civil disobedience was not an Arab thing. And, indeed, this had been true.

Then, again, an abracadabra.

First in Egypt, then throughout the Arab world, common people made themselves extraordinary, and every playbook on the Middle East became merely a scrapbook.

What happened in Eastern Europe without social media was aided mightily in the Arab world by social media. Egyptian students networked on smartphones, so there were no meetings to bust, no leaders to trail and to arrest. It was the revolutionist version of the flash mob dance. Plans were communicated in a flash to thousands at once. A decentralized movement put a million people in the streets, and not only did its leaders not become household names, but I wonder who can name three? (Asmaa Mahfouz was one. I can't bring another to mind without Googling.)

From Tiananmen Square to the Berlin Wall to Tahrir Square to Zuccotti Park, the deciding factor was the moment, impossible to pin down, when people suddenly felt an impassioned identification with one another and with a purpose and inspired others to be brave.

Can the greedy excesses of corporate globalization create a strong enough sense of shared identity among the world's workforce so that across borders and cultures working people will act with unity, communicating instantly through instruments they hold in their hands?

It's possible – and not so unlikely as one may presume.

The computer, the smartphone, Pearl Harbor, 9/11, Elvis Presley, Barack Obama, the fall of the Soviet empire, the ascendancy of China, Asmaa Mahfouz, the Arab Spring – go all the way back to the discovery of the Americas, and you will find that the first rule of history is this:

The expected happens, too, of course – and, as with the unexpected, that's sometimes good and sometimes really not.

At this moment, transnational corporate capitalism proceeds with an accomplishment Karl Marx would envy: a worldwide leveling that is bringing down the Western bourgeois workforce while raising up the peasantry of what used to be the "third" and is now the "developing" world.

James Baldwin once remarked that the white bourgeoisie of the United States, so proud of what they have stolen from others, were incapable of imagining that what they stole from others could, in turn, be stolen from them. Now they needn't imagine; it has become their daily experience.

Bitterness, panic, and outright craziness constitute, at present, the collective response of the white U.S. workforce, the so-called "working middle class." They have not hit bottom yet, but the bottom is coming at them faster than they can understand, and their loss of basic identity is terrible to behold as they uselessly and destructively grasp at falsities while they fall and fall.

Europeans today are not as passive, nor are their leaders as dysfunctional, but their certainties are crumbling just as fast, and they too are falling, though theirs is a more controlled, generally less-destructive fall.

The formerly agricultural peasants of the developing world are becoming industrial peasants. They are rising, but how, and to what level? They eat more often but work harder, in usually lousy conditions, regimented into facelessness, seduced into consumerism, yet gradually synchronized by their consumerism into the pace of the rest of the planet.

This leveling process is happening with astonishing speed. All that seems certain is that the process is inexorable.

One stratum rises above it all: the very few who make untold riches from the labor of the very many – plus the courtiers, scribes, and generals who service them. In the first century, 1% of the population of the Roman Empire owned the majority of its resources; today, the same is true of the United States. That, too, is on its way to becoming a worldwide status quo.

But people are not stupid, whatever their stations in life. And no matter how passively or crazily they temporarily behave for months, years, or even decades, it is only a matter of time before an interconnected world workforce begins to ask, "Who are we really working for?"

The answer will not be "ourselves."

The answer will be "them."

And once workers understand that "them" is truly the answer – and they will – the 99% will find their voice, and the unexpected will take over.

It will be a zeitgeist change; it will happen as quickly as Eastern Europe in 1989 or the ongoing Arab Spring; it will happen because of people like Asmaa Mahfouz and that anonymous Chinese man who stood before the tanks. It will happen, and "Who are we really working for?" will be an unstoppable question flashed around the world. Impossible to say what event or events will ignite the question, but it will ignite because it is the obvious question. And once it ignites, there will be no stopping it.

This four-part essay was commissioned by Rosetta Brooks for inclusion in Six Memes for the New Millennium (Zg Press, January 2012). Given the media's determination to present Occupy Wall Street as the aberrant behavior of clueless freaks, Rosetta and I choose to debut this piece in the Chronicle before winter drives OWS indoors. Like many, we look toward next spring, which just might be America's spring, and the spring of working people the world over. 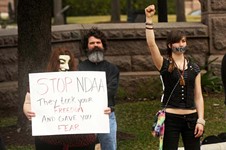 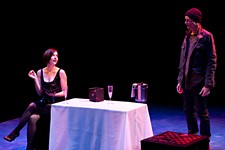