Letters at 3AM: A Sicilian on the Mob

We have not seen real Sicilian mobsters onscreen 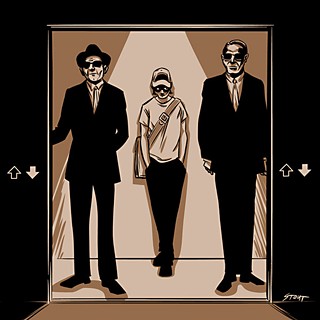 When I saw The Godfather, I had no suspicion that I'd become a journalist; even so, I imagined the review I'd like to see. A spread of head shots: The top two rows are faces of the mobsters portrayed, and the bottom two, the stars' faces. No text necessary.

"Mafia" is the one of the only Sicilian words to be adopted into most of the world's languages.

Sicily, by the way, is quite different from Italy in language and type. For instance, tourists to Sicily are not made to feel welcome. When my Aunt Mary and Uncle Jack visited in their 50s, Aunt Mary's fully Sicilian visage was recognized as such. She was treated well. Uncle Jack's people are Italians; Sicilians made it their business to make him uncomfortable.

Greeks founded a civilization on our savage island, and their golden age died there. Carthage had a shot. Moors ruled for centuries. Normans, French, Spanish – all tried and failed. The island, since the time of Garibaldi, is nominally part of Italy, but there are Italians who curse Sicilians much as some whites in America curse blacks. Sicily is the only place in Europe with a holiday that has startling parallels to Mexico's Day of the Dead.

Its gene pool may be muddy, but, as the whore of the Mediterranean, raped by every rising and falling civilization, the Sicilian character is not at all Italian. Italians have a knack for joy (oh, their opera!), a flair for grandiosity, and a what-the-hell shrug toward life's dilemmas. Sicilians, it is said, are "born old." We are suspicious, clannish, and have equal passions for loyalty and betrayal. Our greatest literary works: Luigi Pirandello's Six Characters in Search of an Author, depicting the psyche as inherently chaotic and family life as a snake pit, and Giuseppe di Lampedusa's The Leopard, a portrait of pride and fatalism, summed up by its great line, "Everything must change so that everything may stay the same."

Growing up Sicilian (we rarely call ourselves Sicilian-Americans – another of our ethnic traits is fierce stubbornness) in New York City from the mid-1940s until 1969 was to grow up with a close-up knowledge of the mob (if one choose to look).

One day I looked too closely.

I was 18, a messenger boy in Manhattan. I delivered a large manila envelope to an Upper East Side townhouse and was surprised to find two elevators in the building. The "soldier" must have temporarily left his post because I boarded the wrong elevator. It made just one stop. When it opened, the lettering on the wall informed me that I was at the front door of the "connected" political boss Carmine De Sapio.

De Sapio and two soldiers faced me and got on the elevator. I was in no danger. To them, I was a bug.

I have my fears, like anybody. Flying, dogs, heights, storms, failure. But, since boyhood, I have tended not to fear human beings.

I never feared as I feared in that elevator. Those three men radiated what I call capital "N" Nothing. A scent of mercilessness – Joe Pesci in Goodfellas or Casino, but without Pesci's charm.

I'd seen such men before; years later, in Las Vegas, I saw their kind again, up close and personal. But never in a smallish elevator from which, during its slow descent, I could not escape.

That is the face of the mob. Pacino never quite gets there in The Godfather trilogy. Brando and De Niro don't come close. James Woods, in Once Upon a Time in America, is nearest to the real deal. (The Sopranos was, for me, a laughable spoof. Those palookas couldn't efficiently manage a pizzeria.)

Al Capone was not Sicilian. Sicilians didn't trust him. That's why they shoved him out of New York and let him have Chicago. They did, however, respect him. Not because he was more brutal than they – he was not – but because of his startling intelligence.

Capone is always portrayed as oafish; his success is attributed to the qualities Pacino exemplified in Scarface: ruthless, crazy, a clever bully, and the agent of his own destruction.

At the age of 26, Capone achieved mastery of the crime and legal systems of Chicago and northern Illinois – the second most populous and economically important area in the United States of his day. He could not do that if he were not as brilliant as he was brutal – and if he didn't have a cold, clear understanding of human nature: what people want, from mayors and judges to street guys and gals; what people fear; what people need; what many cannot help but do if you make them believe they can get away with it.

Capone's crimes were numberless and of stunning variety, but he was convicted only of tax evasion. That takes the brains of a great general.

Here's the kind of wiseguy you've not seen onscreen: "What is organized crime?" asked Meyer Lansky. "Your answer will be, 'When people sit down to talk of committing an illegal act.' But what about the acts that should be illegal?" he asked, listing licensing, banking, and tax sheltering. "I could go on and on. If the rich didn't use the poor for their selfish interest, organized crime could never exist."

Lansky was a tiny Russian Jew. He cared nothing about money or living high. For decades, his word was law in the mob, yet he had a hell of a time controlling his relatives. He loved the game they call The Life, and he despised capitalism so much that he needed to beat it at its own game. And he did. A tough kid, he met Sicilian "Lucky" Luciano in what was almost a street fight but did not become one because, as Luciano later said: "We both had a kind of instant understanding. It was something that never left us."

Until the 1970s, the mob was largely the creation of Lansky and Luciano. Lansky died in 1983. I'd give lots to know what he thought of The Godfather: Part I and Part II – not what he said, but what he thought. Late in life, he said that, were he young circa 1980, going into crime would be stupid. I don't remember his words exactly, but his gist was: Corporations today can do everything we used to do. Why break the law when you can write the law?

I knew a favorite of Lansky's fairly well: the late Susan Berman, daughter of the least famous, important, 20th century gangster, Davie Berman. "A man of respect," as the old Mafia phrase has it. She said Lansky always returned her calls and gave her sound advice.

Susan was murdered, mob-style, in her home, for what someone thought she knew. It was during the Christmas holidays. I was called by a family member and paid respects at her funeral.

By then, I'd written extensively about Las Vegas and the mob. That's how I met Susan. When she told me my work was accurate – well, that was one of the top accolades of my writing life.

I was married when Susan died. My then-wife and I often partied in Las Vegas. She feared for my safety when we heard the news. I said: "If they thought I knew what Susan knew, I'd be dead by now. But our New Year's trip to Vegas – let's put it off for a couple of years."

See, once I started publishing stuff about Vegas and the mob, no matter what hotel I checked into, "the boys" knew I was in town. Sometimes I'd get a call comping me to restaurants and shows. Only suckers and marks are comped. I rarely gambled; I went for research, romance, and trouble. It was their cold, polite, Sicilian-Jewish way of telling me: Be careful – we know you're here.