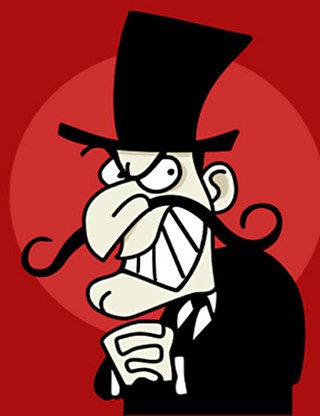 I'm so embarrassed for Kinky Friedman now that he is supporting Rick Perry for governor. I'm even more embarrassed that I once supported Kinky for governor. I mistakenly believed that Kinky was a true stand-up Texan who supported the rights of Texans to live freely – even the ones who dress like Snidely Whiplash. I went to Kinky's rallies, wrote about him, urged my friends to vote for him, and even made a modest donation when he ran against Perry. Now, on The Daily Beast, Friedman says, "I have been quoted as saying that when I die, I am to be cremated, and the ashes are to be thrown in Rick Perry's hair. Yet, simply put, Rick Perry and I are incapable of resisting each other's charm. He is not only a good sport, he is a good, kindhearted man, and he once sat in on drums with ZZ Top." Isn't that all we need to know? But wait, there's more: Rick Perry has signed the National Organization for Marriage's pledge to oppose same-sex unions. The pledge includes five provisions, the most central of them a commitment to support a federal marriage amendment defining marriage as a compact between one man and one woman. So much for Perry's claim that it's a matter that should be decided by each state. Regarding New York's gay marriage law, Perry said that it was "their business, and that's fine with me." And Kinky Friedman says, "So would I support Rick Perry for president? Hell, yes!" And I say to Kinky Friedman, "Where's my refund?" 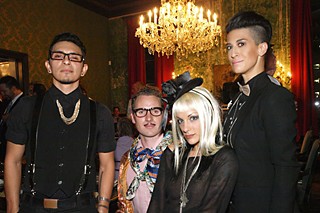 Nico Acosta, Hunter Lohse, Jacki Oh, and Norel Mancuso at the Palazzo Lavaca home/event space (www.palazzolavaca.com – it's for sale) at an event thrown by event planners By Mojo (Photo by Seabrook Jones/www.juicythis.com)

Equality Texas (www.equalitytexas.org), a nonpartisan statewide political advocacy organization lobbying the Texas Legislature for the elimination of discrimination based on sexual orientation and gender identity/expression, is beneficiary of Gagarazzi 2011, which promises to be a jaw-dropping, eye-popping affair. This Friday, Sept. 30, 9pm-2am, at the HighBall, the event features many of Austin and San Antonio's best burlesque troupes, dancers, and performers, such as the Jigglewatts, Dolls From the Crypt, Black Widow Burlesque, Austin City Showgirls, Oh Baby Burlesque, Stars & Garters, and others. Fabulous prizes and a unique raffle (a handmade Lady Gaga Barbie doll, anyone? A basket of handmade Gaga-themed soap?) add to the fun. Lady Gaga donates approximately $20,000 from each tour performance to organizations that help gay youth, so celebrating her benefits not only gay youth and Equality Texas, but, yes, even you.

I received in the mail a box of Pureology's new hair care line, Perfect4Platinum. I have no idea how they knew I had platinum hair; maybe they assume all male fashion columnists have platinum hair. Anyway, it was a lovely surprise at a time when I was about to have to start using Cascade on my locks. The shampoo smells divine, and the conditioner added shine to the cotton ball I call my hair (the things I go through to have white hair). The treatments, like all Perfect4Platinum products, contain chamomile, lemon, and coriander. You can get them locally at Francisco's Salon on South Congress, Bella Salon on West Sixth, the Beauty Store on Lamar, and Cobalt Blue on William Cannon.

The women's fashion show that closes Tribeza's Style Week is one of my favorite shows every year. It's meticulously produced and shows high-style clothes (even if they are already in the stores). Plenty of glitterati will be in attendance. The show is tonight, Thursday, Sept. 29, at the Bob Bullock Texas State History Museum. Tickets are still available at www.tribeza.com.