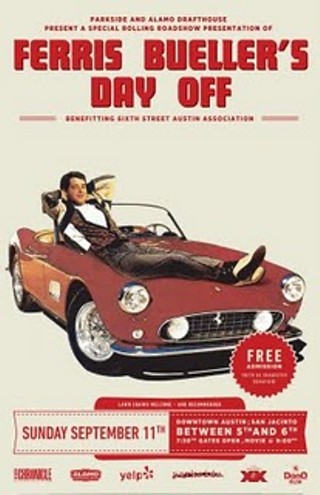 If you saw Ferris Bueller's Day Off during its opening run, your tattoos are probably green. Wait a minute … you probably don't have tattoos – at least not ones old enough to be green. Back in the '80s, tattoos were mainly sported by sailors, bikers, and gangbangers … not exactly the demo John Hughes was targeting when he cast Matthew Broderick as Bueller. This is not to say gangbangers wouldn't have enjoyed Matthew Broderick, but most likely it would have been in a prison setting rather than in a theatre. In fact, even today it's probably a good idea for Matthew Broderick to avoid prisons altogether – unless he would like to get his own tattoo: BITCH. No dis to Matthew, but if he ever gets the slightest inkling he might get sent to the big house, he should start hitting the weights. A movie star of his caliber should easily be able to afford a top-notch personal trainer and high-quality steroids. If not, what's it all worth, really? It's frightening to think that the payoff for being an '80s teen idol is a receding hairline, pasty skin, and Sarah Jessica Parker. And yet … it could be worse. He could be one of the Coreys. All in all, Broderick has done all right for an '80s teen star. His impressive run includes hits like WarGames, Election, and Glory, and then some other movies … like Godzilla and The Road to Wellville – the kind of cinematic train wrecks that make you wonder if Broderick even bothers reading his scripts … or maybe he's just high as a bat's ass when he does, which is the only reasonable explanation for Inspector Gadget. Whether he read the script or just got lucky, Ferris Bueller's Day Off was a monster wave that Broderick still rides to this day. Not only did it make Broderick bulletproof, it also launched/enabled the careers of several other actors as well. For instance: Jennifer Grey. Her prize for playing Bueller's bitter little sister was a quick snog with a pre-hookers-and-coke Charlie Sheen. She also scored a co-starring role in Dirty Dancing with Patrick Swayze, which apparently made her so self-conscious she went out and bought a brand-new schnoz. That youthful indiscretion and her limited acting ability eventually spelled doom for her showbiz career. Oh well, at least she got to play tonsil hockey with Charlie Sheen when he still had humility and a septum. Sheen cannonballed his cameo in Ferris Bueller's Day Off with a starring role in Platoon and a rather spectacular string of forgettable films until he found his groove playing the asshole brother of another '80s star, Jon Cryer. Perhaps the most improbable career launch from Ferris Bueller's Day Off is that of Ben Stein, who played Bueller's monotone, nasal-voiced economics teacher. In an odd twist of Hollywood's star-making machinery, Ben Stein was actually a man of distinction and achievement before becoming a famous actor. A Yale Law School valedictorian, Stein was also a trial lawyer, a speechwriter for Presidents Nixon and Ford, and a columnist for a variety of impressive publications like The Wall Street Journal, The Washington Post, and New York magazine. After Ferris Bueller's Day Off, he ruined his reputation by hosting Win Ben Stein's Money and Turn Ben Stein On, the shameless Hollywood equivalent of humping fame's leg like a randy Chihuahua. Regardless of the indulgences and indiscretions of its cast, Ferris Bueller's Day Off is still an entertaining critique of materialist and status-conscious '80s culture. Sure, it's an easy knockoff of nonconformist fictional heroes like Don Quixote, Robin Hood, and Huck Finn, but it's still fun nonetheless. If you somehow missed it the first few thousand times it's been shown, you should definitely head down to the 500 block of San Jacinto (between Fifth and Sixth streets) for a Rolling Roadshow presentation of Ferris Bueller's Day Off presented by Parkside restaurant and the Alamo Drafthouse. Bring a lawn chair, buy some suds and grub at the food and beer tents, and (re)acquaint yourself with this American classic. Proceeds benefit the 6ixth Street Austin Association, a nonprofit dedicated to the preservation and enhancement of the historic Sixth Street Entertainment District.