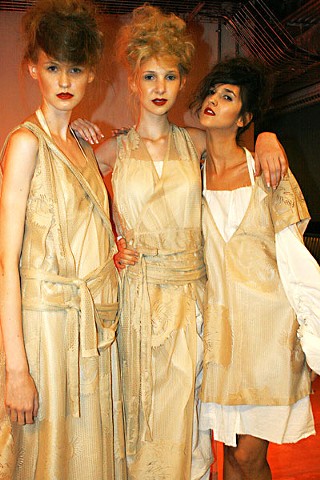 OK, I lied. I said I was going out every night during Austin Fashion Week, but I didn't. After the kickoff party, I decided to conserve energy. Jacki-OH and I dressed respectfully in resort wear for Wednesday's Swimwear and Resort Wear show at the Driskill Hotel. La Perla swimwear from Italy was predictably gorgeous – elegant bathing suits and cover-ups worn by models with impossibly long legs. This was followed by a men's underwear collection from London's James Tudor. I've never been the kind of queen that went berserk watching a men's underwear show, but the crowd lit up like a Christmas tree when the male models in their skimpy attire strode down the runway. I had the misfortune of being surrounded by women – giggling, swooning, hyperventilating women. It felt like Chippendales, and I made a solemn promise that never again would I subject myself to those circumstances – even for fashion. The most obvious change from last year's AFW was the models, this year by Wilhelmina Brown – raising the bar 100%. Thursday night brought us the edgy collections of Dawn Younger-Smith for Boudoir Queen (Austin), the League of Rebels (Dallas and Russia), and Jamie McCarty (Brooklyn). Boudoir Queen was one of the most highly anticipated shows on the roster, and Younger-Smith showed not only her signature reclaimed-1920s looks but also a modern-styled collection that was more haute hippie than Roaring Twenties. I was taken aback by the changes; Boudoir Queen is doing exactly the right thing by expanding limits and broadening techniques. Her clothes are used in a four-page spread in Vogue for Nine West. League of Rebels presented very stylish slim-cut men's suits, tailored beautifully, with pants cropped just high enough to show off colorful, patterned socks. Friday featured classic couture with collections from Celestino Couture (New York City), Estella Balan (Matamoros, Mexico), and Colunga (London). I missed Celestino Couture due to an unofficial AFW party at Hush featuring Champagne Derelicts' carefully curated vintage pieces with fresh, breezy, and modern styling and Black Swan Theory's romantic and sexy restyled vintage that packed a powerful punch. Jacki and I thoroughly enjoyed the show, then dashed to get back to the Driskill just in time for Colunga's timeless and sleek evening wear for women. Saturday was AFW's grand finale, the Austin Fashion Awards. We were most excited about this and in a frenzy trying to plan our red carpet outfits. The day before, Jacki and I dropped into Kendra Scott's store with face masks and AK-47s .... No, it didn't really happen like that, of course. Kendra, Susan Butler, and the rest of the staff were very happy to have us wear their jewels. (I had to look fabulous while presenting the People's Choice Best Designer award, after all.) Jacki and I both sported massive, intricate pieces that Kendra had designed for the recent Randolph Duke show. Host Kim Iverson had every opportunity to sparkle and make the show even more glamorous and dazzling, but instead chose to tell stories about her Korean mother (Margaret Cho owns that routine) and make really bad jokes about gays that left the audience in stunned discomfort. Referring to the crowd as "ladies and gays," she then introduced AFW founder Matt Swinney as "not gay." Really embarrassing, Kim. Aside from that, the awards went very nicely. While local Blackmail had the edgiest show of the entire week, it was Linda Asaf's presentation that dropped jaws. No one expected this 180-degree turnaround from Linda. Gone were the chiffon and charmeuse bridesmaid dresses of previous collections, replaced with casually elegant sportswear. Award for Best Surprise! Overall, AFW was very well-organized. The website was fine-tuned, and I especially loved (and used) the invaluable AFW iPhone app. This year's AFW approached the excitement and glamour expected from fashion weeks in other fashion capitals. I still have plenty of reservations about AFW's lack of focus on local design and that it really seems to be about the organizers making money. On the other hand, AFW is digging in for the long haul and should continue to evolve into a truly Austin-style event.