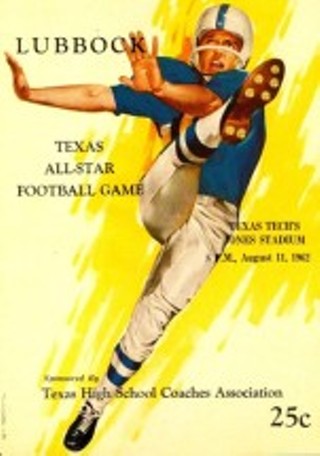 If you're reading the Chronicle, there's a pretty good chance that you were never too big on football – at least not the American kind. Let's just be honest with ourselves, shall we? Yes, you might enjoy football for its camp and spectacle. You might even own a slightly stained, vintage, 1970s-era Dallas Cowboys cheerleader poster or perhaps an autographed photo of Walt Garrison (who was both a Cowboy and a cowboy, and America's number one spokesperson for Skoal smokeless tobacco), but you probably didn't actually play football – at least not much past Pop Warner. That's understandable. After all, American football is a violent, brutal sport where size, strength, and aggression dominate. Walt Garrison himself sustained five concussions over the course of his football career before he was finally forced into retirement – not because of a nasty case of mouth cancer, but because of a knee injury sustained while pursuing his favorite leisure activity: steer wrestling. Yes, Walt was a bit of a badass, which is something that could be said of just about anyone who makes it to the NFL … with the exception of maybe the place kicker and the equipment manager, and even they are fairly butch in relation to the average male. Troy Aikman would certainly vouch for that. He had 10 concussions during his career. In fact, he claims he doesn't remember anything about Super Bowl XXVIII … not even playing in the game … because of a concussion suffered in the NFC playoffs two weeks before. Now that is getting knocked the fuck out. The crazy thing is that Troy Aikman is a big, strong dude by just about anyone's standards. He was certainly the big man on campus at Henryetta High School, where he was a center on the basketball team (that's the tall guy in the middle). High school football is a bit more accessible to the average male (and in rare cases, female), but its players are still a relatively small percentage of the overall population – some would say a dumber, brutish, and belligerent percentage. Again, let's be honest here … they're mostly right. Nonetheless, we live in a state and a nation that either cherishes these traits or at least finds it enormously entertaining watching them play out. Perhaps it's a little bit of both. Football is about the closest you can get to human demolition derby, and really, nothing is more satisfying than watching the asshole alpha male who gave you a swirly in the restroom during lunch break get the snot knocked out of him by someone even bigger and meaner than he is. Whatever the reason, in Texas, football is an unrivaled Friday night ritual. Yes, we could have chosen karaoke … or cock fighting … or naked baby-oil twister … but we chose instead to watch the tough guys beat up on themselves for a couple of hours … right after we spend a few hours in the parking lot getting our swerve on. Just about everyone who grows up in Texas has memories of Friday night lights, for better or worse. You might have been in the marching band, the drill team, the cheerleading squad, the pep club, a mascot uniform, or underneath the bleachers getting stoned, but football will most likely always be at least a small part of your identity as a Texan. This Saturday the Bob Bullock Texas State History Museum is hosting a free opening day pep rally for "Texas High School Football: More Than the Game," a special exhibit that examines high school football's cultural influence in the state of Texas, curated by writer Joe Nick Patoski. The pep rally will feature marching bands, dancers, and a crash course in football rules. You might not be big on football, but you might be surprised to find you know more about it than you thought.