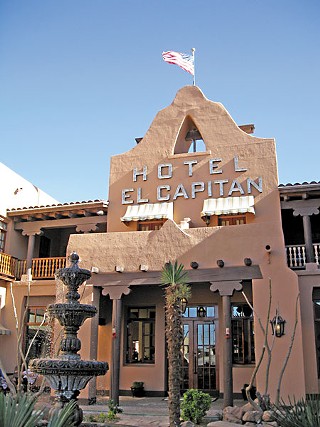 The Hotel El Capitan's rooftop sign can be seen for miles glowing bright red in the night sky, beckoning travelers to a comfortable night's stay in Van Horn.

Since 2007, the hotel has been a part of a group of local lodgings owned by Lanna and Joe Duncan. Their other accommodations include the historic Hotel Limpia and Stone Village Tourist Camp in Fort Davis and the Hotel Paisano in Marfa.

At all of these locations, the Duncans have rescued aging inns and restored them to the condition of their glory days. The El Capitan provides affordable luxury accommodations for the weary traveler whether for a night or for an extended stay to explore the area. Like most historic hotels, the rooms are relatively small but comfortable with modern conveniences. Each room has been updated with Internet access and cable TV. The bathrooms were completely remodeled using black-and-white hexagon tiles after the conveniences were removed when the building housed a bank.

The Hotel El Capitan, named for the mountain in the Guadalupe Mountains, opened in 1930 as one of the five Gateway Hotels established by Charles Bassett of El Paso to encourage tourism in the area. The building has an almost identical floor plan to the Hotel Paisano. Both were designed by Henry C. Trost.

Trost, a noted architect in West Texas, began his career in Chicago, where he was influenced by Louis H. Sullivan and Frank Lloyd Wright. In 1903, he and his brother founded Trost & Trost Arch­i­tects & Engineers of El Paso. Over the next 30 years, the firm designed more than 300 buildings in El Paso and hundreds of others in West Texas, Arizona, New Mexico, and Colorado. As the firm's chief creative force, Trost designed structures in a variety of styles from Victorian to Art Deco. He was also the originator of what he called the "Arid American" style of structures that were particularly suited for the Southwestern heat. For buildings like the pink stucco Hotel El Capitan, Trost blended his Arid American style with Mission Revival. The result is a lobby with Spanish tile and wrought-iron staircases. The front has a mission facade with a shaded courtyard entrance containing a fountain. Many of the 52 rooms have small, private balconies overlooking the courtyard.

Not only does the Hotel El Capitan offer comfortable overnight accommodations, but it also has a nice dining room with a diverse menu as well as the Gopher Hole Bar. Each morning, a complimentary breakfast buffet starts the day.

Van Horn is at the crossroads to many West Texas attractions. The Guadalupe Mountains and Carlsbad Caverns national parks are to the north. Big Bend National Park is to the south, and El Paso is 120 miles to the west.