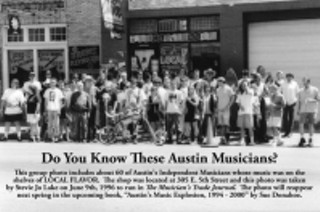 If you think it's tough being a has-been, try being a never-was. The sad byproducts of Austin's status as a live music mecca are the legions of musicians who endure in spite of heartbreaking obscurity, who never seem to be able to score anything better than a midnight Tuesday slot batting cleanup on a five-band bill at Headhunters. (Note: If you actually happen to be a member of Half Baked 69, this doesn't necessarily mean that you're condemned to obscurity, but it's a pretty good hint that some introspection is in order regarding your music career.) Sounds a bit cruel, yes, but the ugly truth is that not everyone can be a winner. The music business in Austin is a heartless bitch – not necessarily because of the people who run the show, but because of the people who don't. There are literally thousands of them, and none of them moved here because they thought they were shitty musicians. In fact, quite the contrary. It takes a certain amount of hubris to think you can waltz into Austin (or two-step or polka or watusi) and experience the same heady success and adoration you enjoyed back in Possum Snatch, Ark., or Bug Tussle, Ala. In fact, just scoring a free happy hour gig in Austin often involves disturbing amounts of fellatio – mostly metaphorical, yes, but that can sometimes be even more humiliating and nauseating than the actual physical act, especially if the booker or club owner has a huge metaphorical cock … and they usually do. Most don't admit it, but it takes a staggering amount of time, energy, and enthusiasm just to be a working musician in Austin. It also takes at least a modicum of talent (which is what nonmusicians call skill) to even get your foot in the door – where it will get slammed many times before you actually gain entry. In Austin, it is obnoxious to assume that a musician you've never heard of lacks talent. It's quite the contrary, in fact. One of the basic rites of passage in Austin is seeing a musician who literally knocks your socks off – someone who impresses you so much that you are actually incredulous that person isn't touring with Springsteen or at the very least headlining the Austin City Limits Music Fest. After it happens five or six times, your incredulity will inevitably start to wane. After a few years of having it happen again and again, you begin to question whether or not the music business is even remotely merit-based at all. Well, it is and it isn't. Music fans are a fickle lot, prone to fads, fashion, and spectacle. If it were all about "talent," Lady Gaga wouldn't have to wear a dress made out of meat. As it turns out, she's not only in the music business, she's in the entertainment business, so it's kind of her JOB. If she thought she could wear a dress made out of baby seals, dalmatian puppies, or the foreskins of little Jewish boys, rest assured she would … just as soon as she could find some Chinese orphan toddlers to sew it. The point is, the music business is a complicated concoction of a lot of repulsive shit that doesn't have a lot to do with music. Is it any wonder that musicians loathe doing the business part of the music business nearly as much as they do holding down a day job? Not at all. Really about the only thing you can assume about musicians in Austin is that they really enjoy playing music … and that's a good thing, because for a majority of them, that's the only reward they're going to get out of it. This Sunday at Threadgill's World Headquarters, a great lineup of musicians – some more anonymous than others – will be playing a show celebrating the release of Never Heard of 'Em, a book written by Sue Donahue, former owner (along with her husband Mike) of the now defunct Local Flavor record shop. Given the relative obscurity of its intended subjects, it's hard to say that the book will be especially profitable or highly publicized. You should not, however, assume it isn't good.