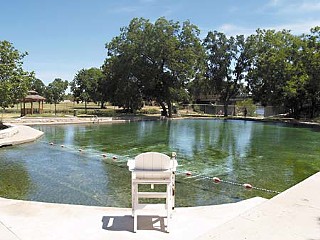 Hancock Springs Free Flow Pool in Lampasas celebrates its 100th anniversary this summer. The sodium chloride-laced water feeds into Sulphur Creek, which empties into the Lampasas River. Bubbling out of the limestone at 70 gallons per second, the 72-degree water has a distinct, sulphuric smell that is stronger on some days than others.

Lampasas' reputation as a health destination began with the town's first settler. Hannah Hughes was cured by the water, and that attracted more sick people. When the railroad arrived from Galveston in 1882, investors began advertising the town as a health resort. A boardwalk from the two-story Park Hotel led to Hancock Springs and the creek. Later, the Hannah Springs Bath and Opera House was built across town at another sulphur spring. The two were connected by a streetcar that ran past the railroad station.

The days as a health resort were short-lived. The Park Hotel burned down in 1895. The opera house closed in 1900, the name shortened to Hanna Springs. The springs continued to attract health seekers until they were fenced off.

The first pool at Hancock Springs was built for the Baptist camp that once occupied the park. "It was a big bathtub for the Baptists," says Glynda Carpenter, who has researched the city-owned pool's history while raising funds for it.

"In those days you got a towel and soap for 15 cents," she said. "Women and children used the pool during the day and men in the evening." Although the pool has been modified over the years, it's pretty much like it was 100 years ago.

To pay for a new dormitory at the University of Mary Hardin-Baylor, the Baptists sold the 109-acre park to the Baker and Little Swimming Club. For seven years the club rented boats and towels at what it called "The Best Bathing Resort in West Texas." Lampasas was considered the western edge of Texas civilization.

The city bought the property in 1936 and leased it to Camp (now Fort) Hood as a recreation area. Convalescing soldiers stayed in cabins leftover from the Baptist encampment. After World War II, the city added a golf course and baseball fields.

A few years ago, the state health department threatened to close Hancock Pool. "They told us what we couldn't do," Carpenter says. "So we asked what we could do. They said stop putting chemicals in it."

Hancock Pool is now one of the few free-flowing pools in the state. The water comes straight from the ground.

Hancock Springs Free Flow Pool is southwest of downtown Lampasas off U.S. 281 South and is open Thursday through Saturday from noon to 7pm, and Sundays from 1 to 6pm. Admission is $3.50 for adults and $2.50 for children. Towels and soap not included. The historic Hostess House contains the Green Frog Tea Room and is open for lunch and dinner Tuesday through Friday.