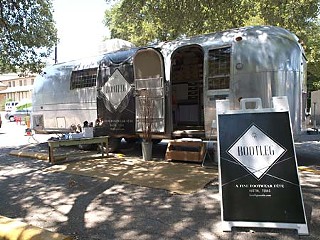 With shoes from $48 to $1,064, Bootleg is the most high-style trailer on the chic SoCo strip. (Photo by Seabrook Jones/www.juicythis.com)

FIDDLESTICKS Did you hear the nasty rumor about Neiman Marcus closing its Domain store? Not one to shilly-shally around with dirt like that, I put on my smartest Nancy Drew outfit and immediately wrote general manager and Vice President Nancy Nichols to ask if it could possibly be true. It is nothing but a nasty rumor. Nichols says: "Our business here is great. We are running one of the top increases in the company and exceeding our plan. We are trying to figure where to add some sort of eatery to the store. The Domain as a whole is doing really well." Whew! I strongly feel that Neiman Marcus, as a part of fashion history as well as Texas history, definitely belongs here in the state capital.

GUARDIAN ANGELS I love Hospice Austin for so many reasons, including its annual Beauty of Life brunch (Friday, Sept. 9, 9:30am at the Renaissance Austin, www.hospiceaustin.org) with this year's featured speaker, the eternally beautiful Andie MacDowell discussing "Feeling Beautiful at Any Age." Another reason to love Hospice Austin is its new Pet Peace of Mind program, which trains volunteers to help take care of the pets of terminally ill clients. "We're just there to make that relationship better so that the patient can enjoy the pet without worrying about what will happen to it or not being able to provide for it the way they once could," said program coordinator Megan Wilson. "It may be anything from delivering food once a month to coming once a week and walking the dog or playing with the cat." Call 342-4785 for further info. 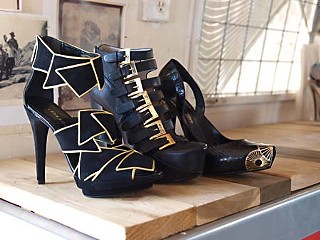 THE BOOTLEG TRAILER Among the plethora of trailer-based businesses, there is indeed something new and fashionable. Bootleg (www.bootlegaustin.com), billed as a Fine Footwear Fête, is the brainchild of former Tribeza staffer Sarah Ellison Lewis. The 28-foot Airstream Land Yacht on South Congress features a variety of high-style shoes for women (with a few choice selections for men, too) and is open Thursday-Sunday, 11am-7pm, and anytime by appointment.

ON EDGE Austin can look forward to a new men's store opening later this month. Beyond Tradition's Phillip Solomon is opening Edge Boutique, "a revolutionary men's store" at 411 Brazos (the former Kathy Womack Gallery space). With brands such as True Religion, King Baby, Buffalo, Civil Society, and others, Edge will also feature select women's accessories from Hammitt Bags, Velvet Heart, and Rock Revival. Get a preview at www.edge-boutique.com; we'll keep you posted on the actual opening.

CELEBUTARDS What is up with Katy Perry? Does she think she is the first woman to have bosoms?... Victoria Beckham has finally given birth to the little girl she and David Beckham have been trying for. Posh and Becks, alternately known as Thick and Thin, are doubtlessly delirious over the arrival, and you know Posh was thrilled to drop the extra weight. Of course, the blogs are abuzz with theories surrounding the "Mend It Like Beckham" technique of bearing a child via the value combo of birthing procedures, the C-section/tummy-tuck. Ideally, the product of this little procedure will look more like Becks than his vertically challenged extraterrestrial spouse... OMG, Glenn Beck is moving to Texas. Having purchased a $4 million spread outside of Dallas, the bloated hatemonger (also known as Chicken Little) will have his new studios there but is also keeping those in New York.