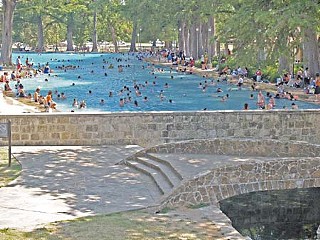 Spring-fed pools lower the body temperature like no air conditioner can. In a year when 98% of the state is baking in the heat and suffering from a drought, it's nice to know that our biggest springs are still providing relief. But like the glaciers of Montana, they may disappear one day.

I was soaking in Austin's legendary Barton Springs Pool recently thinking about the other cool (literally and figuratively) spring-fed pools in Texas. Scattered around the state are thousands of springs percolating from the ground. Texas originally had 281 major springs; of those, 63 have stopped flowing completely since the 1800s.

In New Braunfels, Comal Springs is the largest concentration of springs in both the state and the American Southwest. The 16 primary outlets in Landa Park feed the 2-mile-long Comal River, the shortest river in the U.S. This also is of one the best swimming holes in the country.

At the upper end of the river near the headwaters, the cold-as-ice water runs through a series of channels. The spring-fed pool actually contains three pools in one, with areas designated for kids and serious swimmers. In 1956, the springs dried up completely, something that hasn't happened again since.

San Pedro Springs pool in San Antonio's San Pedro Park was once entirely spring-fed. Several droughts and overpumping of the aquifer depleted the springs in all but very wet years. The natural spring water in the pool has been replaced by city water. The first pool replaced a small lake in 1922 and was rebuilt in 2000.

The land occupied by the park was set aside for public use in 1729 by the King of Spain. It is the second oldest park in the U.S. behind Boston Common. The mission that became known as the Alamo was originally near the springs before it was moved to its present location.

The mineral waters of Hancock Springs pool in Lampasas have attracted tourists since it was constructed 100 years ago this July. The slightly sulphur-scented water is said to have curative properties. This may be the oldest continuously operating spring-fed pool in the state.

My favorite of all the spring-fed pools in Texas is San Solomon Springs pool in Balmorhea State Park just north of Fort Davis. The 1.75-acre, V-shaped, spring-fed pool is so clear that scuba divers practice there. The water is a refreshing 72 degrees and pours out at 22 million gallons per day. The pool was completed in 1941 by the Civilian Conservation Corps.

The best way to visit the pool is by booking a room at the San Solomon Courts in the park. The motel-style cabins are currently being rebuilt, but many of the historic stucco and red-tile-roof rooms are still available for rent. The park also offers camping and RV hookups.