After a long absence, Your Style Avatar returns ... to SoCo 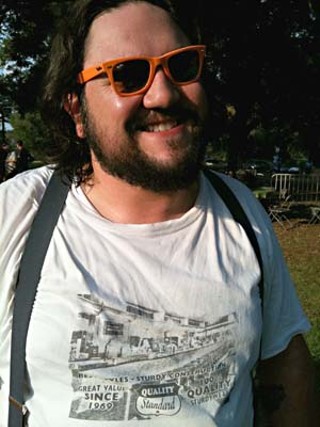 Nakia lit the stage on fire at KGSR's Blues on the Green last week – then took time to meet fans and sign autographs by the stage. (Photo by Seabrook Jones/www.juicythis.com)

NAKIA PART DEUX I wrote my little love letter to Nakia last week. This past weekend was the homecoming party for Nakia from The Voice at Threadgill's on Sunday. Celebrating his thrilling success, Nakia performed a new range of songs with his band the Blues Grifters as well as Tje Austin, who was also on Cee Lo Green's team. The evening, while a "welcome home" tribute, was also a bit of a goodbye for Nakia as he sets off on The Voice Top 8 tour.

BLACKMAILING While Gail Chovan is gallivanting around Paris teaching fashion (not French as I said a few weeks ago) and writing a book with her children, I've been trying desperately to be her by helping cover Blackmail while she's gone. It certainly has been inspiring to be back in the Blackmail atelier since I have rediscovered the pleasure of sewing. I have such a love/hate relationship with sewing, so getting my feet just a little bit wet has been exciting. Last Thursday, my intern Trey Gerlich came in and worked with me, and I've begun teaching him the fundamentals of sewing. Slightly higher up on the sewing learning chart is my partner in fashion crimes Jacki Oh, who also joined us. But we weren't working on any projects for me. It was all sewing for friends who needed this or that done. OPP, I call it: Other People's Projects. Though Jacki and Trey were ardent students, by the end of the day and the end of the projects, I was exhausted. It's tough to teach sewing. I can either patiently show the student how to do something that may take them hours or I can snatch it away and do it myself in five minutes. On the other hand, the gratification of sharing my wealth of knowledge with eager acolytes is unsurpassed.

STROLLING SOCO While down on SoCo, a place where I used to spend the majority of my time before I moved to Bugtussle, Texas, I realized it was First Thursday. I've avoided First Thursdays for a number of years since the tenor of the event changed from a hometown celebration of one of Austin's most vibrant neighborhoods to little more than a public drunkfest. Perhaps that's leveled off a bit. Jacki and her roommate Nico and I met at Doc's Motorworks for a nibble before setting out. I'd only been to Doc's once before when it opened and rued the fact that it had attracted the frat boy and sports fan crowd to an avenue that had been previously noted for its style. This time, it was way too noisy inside, so we sat outside under the umbrellas and misters as the sun set. The food was tasty and the service was terrific. We then went into Parts & Labour's latest establishment, next door to Doc's. Parts & Labour is another one of those places where I went when they first opened and was completely underwhelmed. Printed T-shirts and tennis shoes sprayed with glitter were just not my idea of good design. So dropping by the new location was a true revelation. They've taken that old, dark alterations business and turned it into a bright, spacious shop loaded with local designs. The ceramic South Austin coasters that greet you upon entering are fabulous. With varying local scenes, they are $10 each or four for $35. There were several very attractive and affordable collections of dresses. Notable among them is the Curry Beth Dunckel collection: smart, bright, fun dresses with clean styling and easy-care fabrics for $58-68. Then it was on to see our old friend Christine Ann at Goodie Two Shoes for her 10th anniversary sale. It's so hard to imagine GTS is 10 years old! I remember the opening like it was, well, less than 10 years ago. Shoes, dresses, and jewelry were flying around like a tornado had hit the place. Jacki picked up a number of charming bargains that came whirling around her, and then we were off. Our next port of call was the Continental Club Gallery, where we met our friend who stencils under the name of Niz (www.nizgraphics.com). Her studies in pop culture were rich, vibrant, and thought-provoking ... as was a young woman we met, Anslee Connell, who designs "curvy couture" as Savannah Red (www.savannahredislove.com). Savannah's a big girl, and having been a big girl myself, I understand exactly how difficult it is to express yourself though clothing that fits well and is flattering. Savannah Red is the whole package. As glamorous as a movie star done to the nines, she is sexy, tasteful, and thoroughly delightful. Designing for sizes 12 and up, she absolutely knows the ins and outs of plus-size design. Wouldn't you rather have your clothes designed by someone who truly understands the challenges? Or by some skinny queen who has no clue that tube tops and hip-huggers might not be the right thing for you?