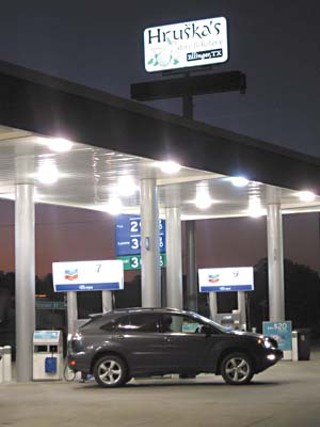 Hruska's Store & Bakery in Ellinger is no ordinary pit stop on the drive between Austin and Houston along TX 71. It is an oasis with hot coffee, good food, and clean restrooms.

On the Austin side of the halfway point between the two cities, the lights of Hruska's (pronounced "rhoosh-kuz") gas pumps are a welcome sight to weary travelers. From the outside it looks like any other roadside convenience store, but inside it's a supermarket with baked goods, sandwiches, drinks, and knickknacks.

In 2009, Texas Monthly rated Hruska's cheeseburger as 42nd best among the Top 50 burgers in the state. The all-beef patty might have impressed the reviewers, but it must have been the fresh-made bun that tipped the scales in the hamburger's favor. At just under $4, the burger is a great bargain.

Most regulars would rate Hruska's kolaches or the klobasneks (pigs in a blanket) as the best items on the bakery's menu. The delicious little pastry pillows with fruit filling are incredibly light and fluffy. The dinner rolls and cookies are also favorites that deserve a ride home to the dinner table.

Kolaches originated in Central Europe, probably as a wedding dessert. In Texas, Czech immigrants turned the semisweet pastries into a breakfast food, and made it the national pastry of Texas. Kolaches are made in many parts of the country, but only in Central Texas have they been elevated to such high status.

The F.J. Hruska General Merchandise Store opened in downtown Ellinger in 1912. Now just a speed trap with three businesses, the town was once the commercial center for area cotton farmers. The 200 residents supported 14 stores, four saloons, two cotton gins, and two churches. In his store, Frank J. Hruska carried nearly everything from shoes to live chickens. The business also included ambulance and funeral services. After 35 years, the store was passed to the founder's sons, Frankie and Gus Lee.

Frankie and his wife, Bessie, opened a service station on the highway in 1952 that evolved into the present store. Kolaches baked by a local woman became a Saturday morning tradition at the station in 1962. Changes in health department rules prohibiting the selling of homemade foods discontinued the practice in 1990.

When Teresa James, Frankie and Bessie's granddaughter, took over the business in 1995, she added the bakery and grill. Using the original recipe, Teresa has faithfully re-created the Czech pastries.

Besides the fresh-baked goods, Hruska's also sells a variety of locally made food products. The meat case is often full of several different kinds of sausage produced by local meat markets.