A chicken, a dog, and a homecoming: Just another week in the life of Your Style Avatar 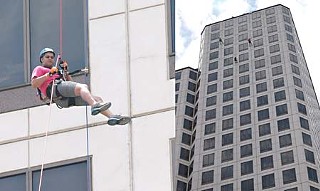 Josh Martinez rappels the 32 stories of One American Center, raising money for the Make-a-Wish Foundation. (Photo by Seabrook Jones/www.juicythis.com)

AN ACT OF DOG My 17-year-old niece Annie Moser was visiting from Seattle a few months ago when a man showed up at our door. Because my mom runs a neighborhood list on the Internet, the man had been directed to us by neighbors. While visiting from Houston, he had been involved in a car wreck near our exit on I-35. Voice breaking, he explained that he got out of his car after the accident to inspect the damage and his dog, Chloe, upset by the accident, escaped from the car, disappearing into the brush of the old Heep Ranch property. The man was devastated, and my mother immediately sent out an alert on our list and on nearby neighborhood lists as well. The man put up those sad "lost dog" fliers around the area, but being from Houston, he eventually had to return to his home and work. All of us knew the heartbreak of having a missing pet, so Annie (who wants to be a veterinary doctor) and my sister Margaret continued the search by adding more and larger signs and driving around for miles searching the fields for the dog. Every time they would see something white moving off in the distance, it turned out to be an errant grocery bag littering the landscape. Every time my mom and I would go to the grocery store, we scanned the fields looking for the dog ... or something, even if it was just buzzards circling. The signs my sister and Annie posted remained in place for months, a constant reminder of the missing dog, until my sister and I finally removed them two weeks ago. Just days later, a neighbor posted that she had found a small white dog and was taking care of it even though it was causing trouble with her cats. Margaret and I went to the neighbor's house to bring the dog to our house, where it could be with our dogs until we figured out what to do. Filthy, burr-matted, and slightly injured, the dog was given a bath and a trim. She settled down quickly, eating, drinking, and sleeping among our dogs. It did not take long before my mother, the St. Franc[e]s of Manchaca – who rescues baby birds, fawns, and opossums – began to wonder if by some stretch of the imagination this could be the same dog that had escaped from the car accident. Searching through her files, she found the contact info for the man from Houston and called him. We wouldn't know until the man could see the dog close-up. He arrived early the next morning from Houston. When my mom opened the door, the man saw the dog and screamed "Chloe!" and fell to his knees. The dog immediately responded by dashing toward the man, licking him, and scampering around. No one could quite believe this was happening. It was an emotional moment, knowing that the man had already grieved the loss of his dog for several months. We had no clue what had happened to the dog during that time, only that à la The Incredible Journey she had returned to the place she had last seen her owner. It had taken time, energy, and a handful of people to bring this episode to its happy conclusion. It's what we all pray would happen if it were our dog who was lost.

BLOOM – I MEAN, BOOM Two weeks ago I attended Boom, an art party fundraiser for the Austin Gay and Lesbian Film Festival. Boom used to be called Bloom. I had attended that party for years, but aGLIFF has been working toward rebranding the event into something newer and fresher, and they indeed did that. Boom was a delightful mix of art and charity with an art auction that benefited aGLIFF as well as the artists, plus treats from Frank, DJ sets by Learning Secrets, and an appearance by the fabulous Rebecca Havemeyer. With some new heavy hitters on their board, aGLIFF is poised to take their mission to new heights and that's good for all of us.

SPIDERPEOPLE The Make-a-Wish Foundation's Over the Edge event last Saturday provided another take on fundraising: The first 150 people to raise $1,500 were allowed to rappel the 32 floors (392 feet) of One American Center at Sixth & Congress. Participants competed for awards for fastest rappel, best costume, slowest rappel, most money raised, and the biggest chicken (which would have been me). The money raised went toward the foundation's goal of granting 220 wishes to children with life-threatening illnesses.